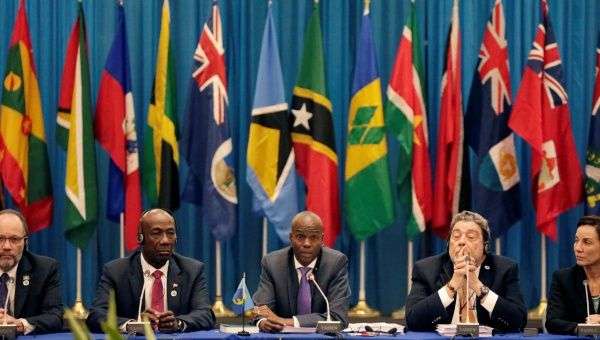 Nationwide News understands tensions ran high during a meeting of regional representatives at the Caribbean Heads of Government conference in St. Lucia yesterday when Prime Minister Andrew Holness strongly resisted a demand by some Caribbean leaders for Jamaica to commit an additional contribution to the CARICOM Development Fund, CDF.

Prime Minister Holness and his delegation which includes Foreign Affairs Minister, Kamina Johnson Smith, are in St. Lucia at the conference.

In 2008, Jamaica made a contribution of approximately $US20 million to the first cycle of payments to the fund.

It’s understood that several Caribbean Prime Ministers led by Dr. Ralph Gonsalves of St. Vincent sought to pressure Prime Minister Holness to agree for Jamaica to make an additional contribution to the CDF.

Prime Minister Holness and the Jamaican delegation refused to budge.

Our sources say Prime Minister Holness and his delegation reiterated that Jamaica has already fulfilled its obligation under the first cycle of the CDF.

And, noted that unlike some other countries, Jamaica has not sought to obtain any project financing from the fund.

It’s understood that Prime Minister Holness also noted that in 2015, Jamaica had indicated that it would not participate in the second cycle of payments due to mandatory fiscal discipline under the IMF deal.

Our sources say the strident push by Dr. Gonsalves for a commitment from Jamaica to pledge more funds to the CDF, led to Prime Minister Holness and his delegation leaving the meeting.

It’s understood that after the intervention of other CARICOM heads including Prime Minister of Barbados, Mia Mottley, Prime Minister Holness went back to the meeting and indicated that Jamaica would not adjust its position.

But, may have another look at the issue in the future.

Sources in CARICOM tell our news centre that the issue is for the time being considered settled.

Calls placed this afternoon to Prime Minister Holness and Dr. Gonsalves were not answered.

It’s understood that Barbados and Trinidad have committed funds to the second cycle of payments to the CDF but are yet to fully make good on their commitment.

The CDF is an institution of CARICOM which is mandated to supply financial or technical assistance to disadvantaged countries.

The fund was established in 2008 with its Head Office in St. Michael, Barbados.

Antigua, Barbados, Belize, Dominica, Grenada, Guyana, Jamaica, Saint Vincent and Trinidad and Tobago are among the members of the Fund.