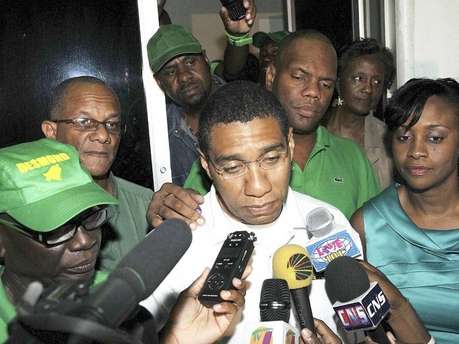 Several JLP Senators are this afternoon voicing their disagreement with a call by Opposition Spokesman on Justice, Delroy Chuck for Opposition Leader, Andrew Holness to resign.

Mr. Chuck argues that Mr. Holness should resign because the Court has found that he acted unconstitutionally in the undated letter saga.

As they walked into Gordon House today, media personnel put the question to several Opposition Senators — do they still have confidence in the leadership of Opposition Leader Andrew Holness?

Or do they agree with the call by MP Delroy Chuck for Mr Holness’ resignation?

First, the Leader of Opposition Business in the Senate, Tom Tavares Finson:

JLP Chairman, Senator Robert Montague responded in this manner when asked whether Holness continuing as Opposition Leader would embarrass his party.