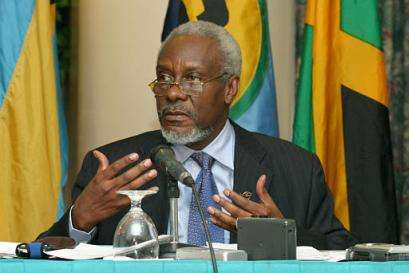 Former Jamaican Prime Minister, PJ Patterson, is urging all Caricom leaders to unite and find common ground on a solution to the crisis gripping the embattled Bolivarian republic of Venezuelan.

Mr. Patterson made the call this afternoon during an exclusive interview with Nationwide News.

But Jamaica’s Prime Minister, Andrew Holness, has since disagreed with a recommendation by Dr. Gonsalves that CARICOM countries not participate in OAS discussions on the issue.

PJ Patterson is appealing to CARICOM leaders to quickly meet and arrive at a unified stance.

The former Jamaican Prime Minister, who’s one of the most highly regarded voices in the region, says he’s troubled by what’s happening in Venezuela.

Mr. Patterson says the divided views emerging from CARICOM is not good.

Mr. Patterson says he has noted the exchange between Prime Ministers Holness and Gonsalves.

He says the Jamaican and Vincentian leader should meet and find common ground regarding how to help the Venezuelan people.

Mr. Patterson says this the worst he’s seen the state of affairs in Venezuela in recent times.

He says CARICOM must make its voice heard.

Patterson says he does not interpret Dr. Gonsalves as arguing that CARICOM should stand by allow the situation to further escalate.

The latest reports out of Venezuela indicate that approximately 50-people have been killed.

This, as thousands of demonstrators continue to protest in a bid to force the Nicolas Maduro-administration out of office.

Today, doctors were called on to treat a man who was admitted to hospital after being set on fire by an angry crowd.