Petition to Save ‘DJ Squaddie’ 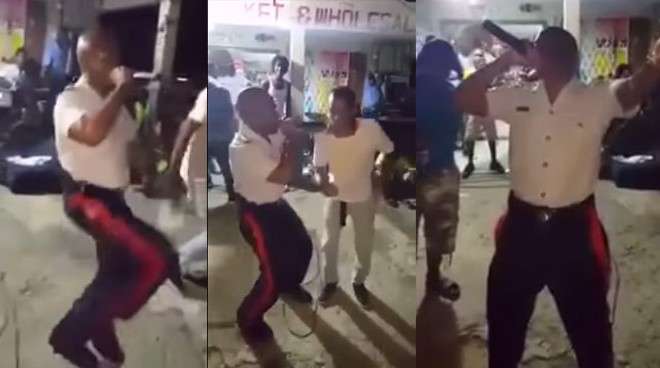 An online petition has been launched in support of the Policeman who was captured on video engaging in a lyrical clash with a deejay in a community in Westmoreland.

The Policeman, Constable Lindon Black, is assigned to the Whitehouse Police.

It’s understood that he’s being investigated by the Police High Command.

The video, which surfaced online weeks ago, shows the Policeman engaging in a lyrical clash with a local deejay in front of a large crowd.

It’s understood that he was there to shut down an event that had overrun the time allotted to the promoters.

The event was organized to raise funds for a contestant in the Digicel Rising Stars competition, ‘Marsha K’.

But instead of using the heavy hand of the law, Constable Black decided to display his lyrical prowess.

He also used the opportunity to encourage the crowd to give more money to ‘Marsha K’.

At one point in the video, Constable Black is seen grabbing his crotch as he belted out his rhymes, much to the delight of patrons.

But the Police High Command is not smiling.

They’ve launched a probe into the matter and the policeman could be facing disciplinary actions.

Perhaps it was his lyrics about the Independent Commission of Investigations, INDECOM, which spurred the High Command into action.

But soon after news emerged that a probe was underway, the lobby group, Citizens’ Action for Principle and Integrity, CAPI, launched an online petition in support of Constable Black,

CAPI, has also written a letter to the Police Commissioner, asking for leniency on behalf of the Constable.

Meanwhile the Policeman has come under fire for his actions, from some users of social media.

One poster, Delton Wizzy said, ‘If it was something positive he was deejaying I would support him, but to listen the garbage that came out of is mouth was mind -boggling’.

But Constable Black has also attracted praise from those who say his conduct represents community policing at it’s best.

Sources close to the policeman say he was doing his job and was merely seeking to engage with the community as they participated in a charitable endeavour.

When our news centre contacted Constable Black today, he declined to comment.