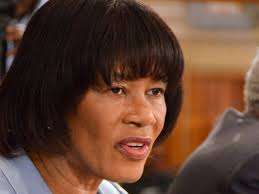 With tensions rising in the PNP constituency organization of South East St. Ann, the party president, Prime Minister Simpson-Miller summoned the MP, Lisa Hanna and her four councilors to a meeting ahead of Sunday’s candidate selection exercise.

Several members of the PNP’s top brass attended the meeting.

Our sources say the Mrs. Simpson Miller lamented the bad relationship between Miss Hanna and 3 of her 4 Councilors… Lydia Richards, Lambert Weir and Lloyd Garrick.

Councillor for the Beecher Town Division, Ian Bell, who also attended the meeting, is the only Councilor in the constituency supporting the Youth and Culture Minister.

Miss Hanna is into her second term as MP.

Issues concerning Miss Hanna’s stewardship of the constituency’s affairs were also discussed in the meeting.

It’s understood that Miss Hanna told the meeting that she’s already accounted to the party for issues raised about her management.

Miss Hanna said it was time for the PNP secretariat to provide a formal report of its findings.