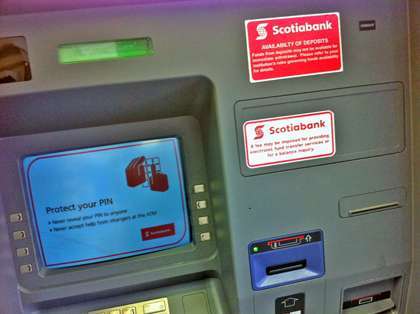 There’s some confusion about whether Scotiabank has withdrawn another controversial fee.

However, those employees are not authorized to speak on behalf of the bank.

Last week, the hashtag, “things Scotia charges for” went viral on social media after the Jamaica Observer reported the fee.

An e-mailed response to Nationwide News today from Scotiabank’s Public and Corporate Affairs Manager, Hope Macmillan Canaan, says all the banks’ fees are currently under review.

Mrs. McMillan Canaan says BNS does not have a specific fee to change a $5,000 note.

However, she says a cash-for-cash transaction fee is generally applied to customers with large amounts of cash or coins that need to be changed.

In a previous response to Nationwide News on February 21 about the matter, Mrs. McMillan Canaan explained that the $385 fee applies to all over-the-counter transactions in-branch.

Mrs. McMillan Canaan is encouraging customers to use other options, such as ATMS, for simple transactions like withdrawals and deposits.

This will accommodate up to seven in-branch transactions and offers unlimited transactions at Scotiabank ATMs, Scotia Online and via the Scotia Mobile App for a flat monthly fee.