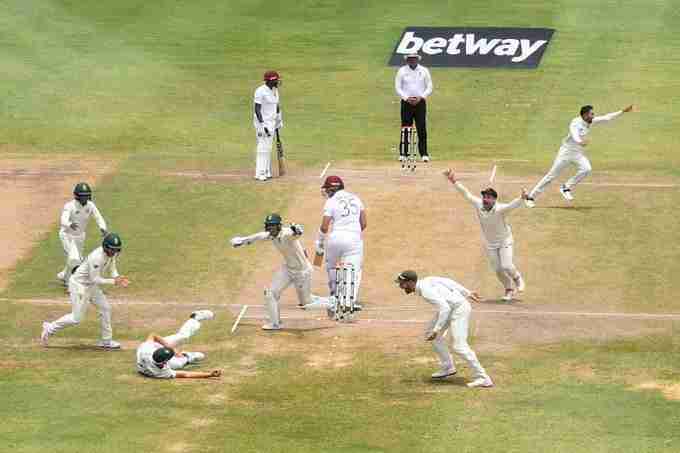 Keshav Maharaj took a hat-trick as he bowled South Africa to victory over West Indies in the second Betway Test, to take a 2-0 series win at the Daren Sammy Cricket Ground.

Then left-arm spinner Maharaj claimed a remarkable hat-trick as he ended with 5 for 36 off 17.3 overs.

He became just the second South African to perform the feat in Test history.

Left-hander Kieran Powell played well to top-score with 51, off 116 balls, with nine boundaries. The next best score was 34 from Kyle Mayers.

Only four batsmen got to double figures in the second innings, with the Windies batting one short as the injured Roston Chase did not come out to bat.

So dismal was the West Indies’ batting over the two matches, that they failed to get past the 200 mark in all four innings.

Maharaj says he has to thank Wiaan Mulder who took an excellent diving catch at leg-slip off Joshua Da Silva to complete the hat-trick.

The teams will now travel to Grenada for the five-match T20 International series, starting on Saturday at the National Stadium.