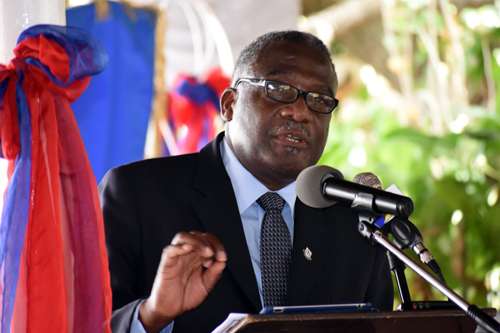 Up to December 28 last year, St. James recorded the second most murders in the country with 152.

The country’s tourism capital was also one of four police divisions to record more than one hundred murders.

But Bishop Pitkin, says, he’ll support enhanced security measures in the parish as long as they continue to save lives.

The State of Emergency was re-introduced in St. James, in April last year, after it was discontinued for five months and a Zone of Special Operations, ZOSO, has been in effect in Mount Salem in the parish, since September 2017.

While addressing a special devotion for members of the Constabulary this morning, Bishop Pitkin reminded the police that although their profession is stressful, it’s what they chose to do.

Meanwhile, speaking at the same event, Commissioner of Police, Major General Antony Anderson, is calling on the public to help eradicate disorder and make Jamaica safe.

Meanwhile, Bishop Pitkin, says a fifteen year old girl who was shot in the head by a stray bullet, yesterday, hasn’t had any brain damage.

The girl, Abigail Mullings, is the daughter of Pastor Mark Mullings.

The police told our news centre that the shooting didn’t take place inside the Mount Salem community where a Zone of Special Operations is in effect.

Since the declaration of the enhanced security measure in September 2017, there have been no reports of murders or shootings in the community.