Junior Market listed company, Stationery and Office Supplies Limited, has signalled its intention to enter the manufacturing sector with the recent acquisition of equipment used to manufacture various types of writing books as well as the brand name SEEK.

The transaction, which is set at $60-million, with the overall rollout cost, including renovations expected to reach $80-million, is being financed through a bond with the Jamaica National Bank.

The acquisition which includes equipment and machinery such as, Ruling, Gluing and Stapling Machines, Book Presses and Raw Materials to manufacture the notebooks, was from local manufacturer Book Empire. 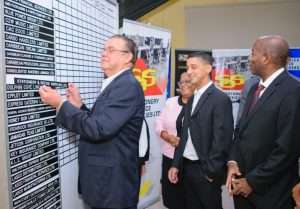 In a statement, published on the website of the Jamaica Stock Exchange, the company announced that this purchase will allow SOS to enter the manufacturing industry in Jamaica.

The company which is starting with books plans to continue to manufacture other stationery products in the future.

The Company said further that with this expansion, SOS will be initially be employing an additional 25 persons. Production is expected to start during the first week of May.

Stationery and Office Supplies reported revenue for the year ended December 31, 2017 of $906-million. This was up from $702-million.