Trapped and Homeless: The Unfolding Terror of Refugees in Ukraine – Told by a Jamaican 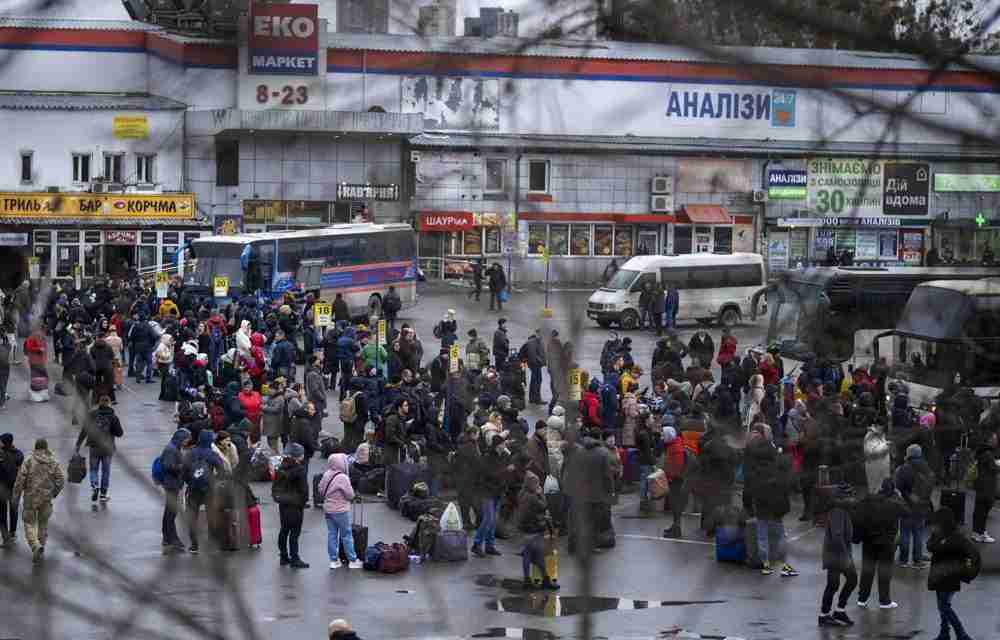 A major refugee crisis is developing in Ukraine where millions of displaced people are having to endure dire conditions, in sub-zero temperatures, to avoid the ongoing Russian invasion of the country.

Poland is the main promised land for thousands of the refugees, but following the break down of law and order, civility is quickly following.

This is the experience of a Ukrainian refugee, as told by Jamaican businessman, William Massias.

According to Mr Massias, over the past 24 hours he has been attempting to take his wife and five children to the western borders of Ukraine with Poland. Gridlock slowed progress that forced the family of seven to start a 20 kilometre trek on foot.

Hungry, sleep deprived and tired, Massias, his Ukrainian wife and children had to make the long walk in zero degree Celsius temperatures. The businessman says the family’s life has now been distilled into two 100 pound suitcases.

Massias says the family was granted a brief reprieve when they encountered a bus that was allowed to take them a part of the journey. However the long lines of waiting people soon broke from civility.

“Finally it was our time as we were 10 deep as the indiscipline behavior began. So I had to throw away all I knew about being a gentleman and with Vicky in tow with five kids, two large 100 pound suitcases and six carry on’s we pushed, pulled, elbowed all who got in the way pushing Vicky and the kids on first and me barely being able to pull these two heavy grips and getting them on.”

However, Massias noted that it’s to the credit of human decency that in times of crisis people are still willing to help. He says the bus in which the family was traveling was eventually forced to stop due to gridlock on the streets.

Again the family continued their journey on foot.

“God knew we could not go anymore and as we struggled pass a car was a big guy with a big cargo van shouted out to us in Ukrainian- come and let me take you! Wow what a blessing.”

The family had made it to a check point. Thousands had gathered. All with the same goal: Poland. Mr Massias says in all the chaos he and his family was able to slip through the checkpoint unnoticed by the soldiers on duty.

However, that’s where euphoria bitterly turned to despair.

“We watched thousands of young wives with kids say goodbye to their husbands hysterically crying – it mashed me up so badly watching this as all men 18 to 60 could not go as they were all ordered to all go back to fight in the war.”

This was also where the toll of war began to dawn on the Massias family.

“Just as I reached back to get my suitcase a young girl holding a one- year-old baby just could not hold the baby any longer and the baby fell from her tired arms. I let go my two heavy suitcases and caught the baby. She look at me and said ‘help me’ as she fell on the ground.”

He had become separated from his family. According to Mr Massias, what unfolded next was pure chaos.

He was holding a stranger’s baby. He had lost his family. Soldiers had started to remove men from the lines who were supposed to go to war. And he had given his wife all of the family’s passports. He was stranded. Fights were breaking out and soldiers were all around sticking guns into people’s faces.

“Now imagine my predicament, family on the other side I have no passport and now a male alone with mostly women and children striking like me to get to the other side.”

His family had made it across but they were hysterical because he wasn’t there. However, it was that hysteria that allowed him across. A soldier had been trying to get the family to leave but they would not without the patron of the family. About an hour after his family made it across Mr Massias says he made it near enough to the front of the line to be recognised and was granted permission to cross.

But, as with every step of these refugees’ journey, every victory was bitter.

“So after getting past the first gate we thought it would be easier going until we came around more people packed like sardines in a cage as big as half of a football field,” said Massias. “[We] waited and waited and waited all night in the freezing cold.”

Fights broke out and there were several stampedes. News spread of a priority line for children. But that was worse than where they came from. The area was poorly manned with less organisation.

“The government here were just not prepared for this mass amount of desperate people. All kids tired and frozen with barely any sleep.”

This is when a grim reality dawned on the Massias family. The refugee situation had grown so dire that many families had decided to brave the war.

“When we were walking on the highway towards the border we saw considerable amount of Ukrainians walking on the other side heading back from the border into Ukraine. Now I am fully understanding what happened to them.”

His family decided to join other families who were being escorted back into western Ukraine. Mr Massias attempted to get the children warm at a bus station as all hotels were booked. This as there was at least a day’s more waiting ahead for the already exhausted family to have their documents checked to get into Poland.

He says he’s attempting to contact the American embassy in Poland and the Polish Consulate in Jamaica in his attempts to evacuate his family from a war zone.

In the background of this family’s journey to escape a war Russian forces are attempting to take the capital of Ukraine, the western city Kyiv.

The war is escalating. International media is reporting that Ukrainian forces have slowed the advance of Russian troops on Kyiv and two other cities, as fighting becomes more ferocious.

The fighting is sure to worsen a deepening refugee crisis.

“We are truly trapped and homeless at this time. The bus station is warm, close to the border with other families packed inside with us . So despite not crossing over into Poland I believe we are in the safest place in Ukraine at the moment.”