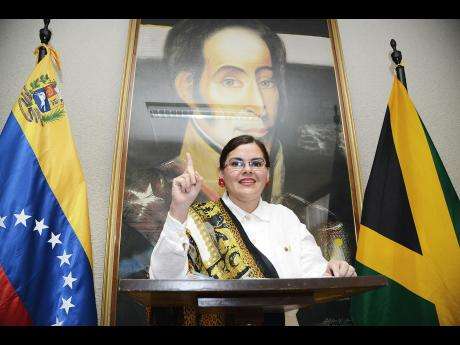 Venezuelan Ambassador to Jamaica, Luisa Gutierrez, is defending the move by President Nicholas Maduro to create a Constituent Assembly in the South American country.

Ms. Gutierrez, told a meeting of the Kiwanis Club of Down Town Kingston today, that the move was legal and justified under the Venezuelan Constitution.

The Constituency Assembly- a Pro-Government super body– has the power to bypass and even dissolve the current opposition-led National Assembly.

The move has been denounced by several regional powers including the United States.

The Venezuelan opposition argues that Maduro is using the Assembly to set himself up as a dictator.

But Ms. Guttierez says the Opposition was invited to participate in the assembly but chose not to.

She says the Opposition’s call for international intervention in Venezuela has threatened the sovereignty of the country.

Scores of people have died in violent clashes between the security forces and protestors who oppose Venezuelan President, Nicholas Maduro.

But, Ms. Guttierez says the media have made the problem seem more widespread than it actually is.

She says Venezuela remains committed to the democratic process.

Ms. Guttierez is admitting that the country is facing some problems and the Constituent Assembly will be working to return peace and stability.

Venezuela has been hit with an economic crisis due to plummeting oil prices– the country’s largest export.

This has caused severe inflation, unemployment and mass shortages of basic food and medicine.