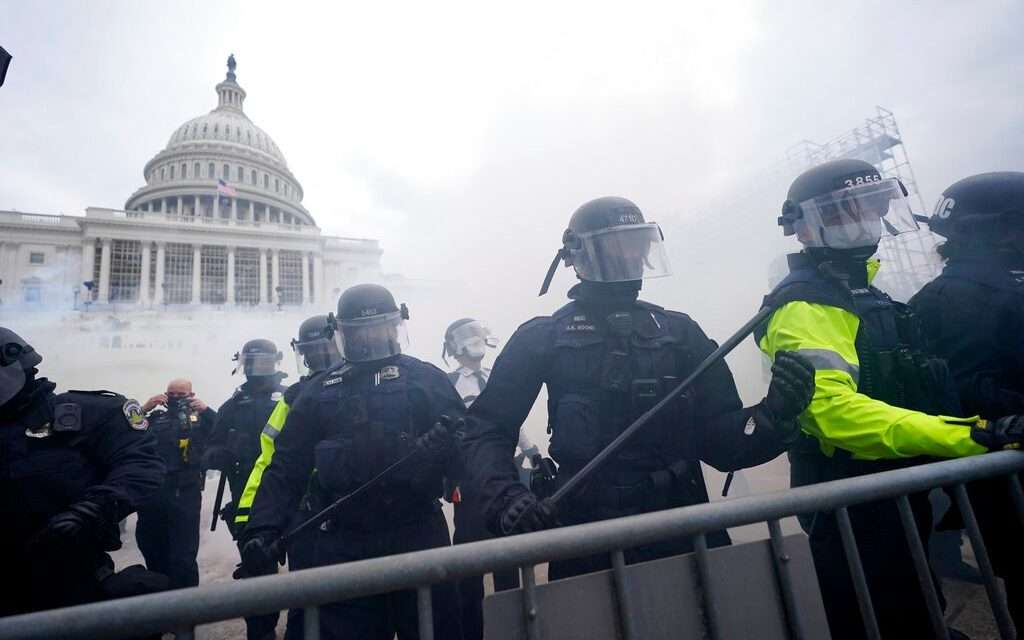 The seat of power and government in the United States, Capitol Hill, in Washington DC is under siege this afternoon.

Thousands of Pro-Trump protestors stormed the capitol to protest the outcome of the Presidential election.

They were also attempting to disrupt the certification of the election of President-elect, Joe Biden.

In an extraordinary development, hundreds of flag waving Trump supporters forced their way into the building as the US House and Senate were in session.

It should have been a routine Constitutional procedure, the counting of electoral votes from several States to elect a new US President.

But with Donald Trump’s growing desperation to cling to power, the stage was set for an explosive showdown in the US capital.

It was a charged political atmosphere as Trump rallied his supporters to back his reckless and baseless claims of a stolen election.

The result was far worse than many feared.

US Representatives and Senators had to flee.

The former US Senator from Missouri, Claire McCaskill, reacted with alarm as the protesters overrode metal detectors and other security arrangements.

It became increasingly clear that the Trump base was prepared to disrupt the lawful certification of the election results.

In one tense moment, capitol security could be seen with guns drawn on the floor of the US House.

Reports indicate at least one person may have been shot.

A 6 p.m. curfew has been declared in Washington DC.

Mr. Pence declared that his oath to the US Constitution required him to impartially preside at the certification ceremony.

In a sign of President Trump’s fading chances, Senate Majority Leader, Mitch McConnell, took to the Senate floor and denounced the attempt to over turn the election.

Mr. McConnell says the attempt to overturn the election in Congress is wrong.

It’s now left to be seen how much longer President Trump and his backers can delay the will of the American people.

Meanwhile, President Donald Trump, has called on the protesters he encouraged to go home as the nation’s capital continues to be gripped by chaos.

In a video shared through social media this afternoon the outgoing Commander in Chief called on his supporters to respect law and order.

His incoming successor, President elect Joe Biden, on the other hand, condemned the behaviour of the protestors as an assault on democracy.

That’s the message of the US President after bringing chaos to the US Capitol.

The President over the past few weeks has been fulminating due to his election defeat to President Elect Joe Biden.

He however continues to insist that the process was fraudulently stolen from him.

In contrast the incoming President Elect, Joe Biden, in a plea to the nation  just moments ago called the actions of the Trump supporters an assault on democracy.

President Elect Biden described the scenes unfolding as an incited act of sedition.

He called on President Trump to step up and bring the nation back from the brink.

“Unrest tantamount to a coup”

Meanwhile, an attorney at law and former Republican strategist, Jason Emert, is describing the political unrest in the United States as tantamount to a coup.

Mr. Emert says the US Cabinet should move to invoke the 25th amendment to the US Constitution.

Such a development would remove Donald Trump from office ahead of the end of his term in 14 days.

The attorney at law says Mr. Trump has abdicated his responsibilities as President, and unfit to lead.

He was speaking with Cliff Hughes, Miss Kitty and Abka Fitz Henley on Miss Kitty Live this afternoon.

The Oragnisation of American States, OAS, is condemning what it calls an attack against institutions, by protesters today on Capitol Hill.

In a statement, the OAS says it repudiates the actions of the protesters.

The OAS says democracy has its fundamental pillar the independence of the powers of the State.

It says the State should act completely free of pressure.

It says the US should return to much needed rationality and a conclusion of the electoral process in accordance with the constitution.