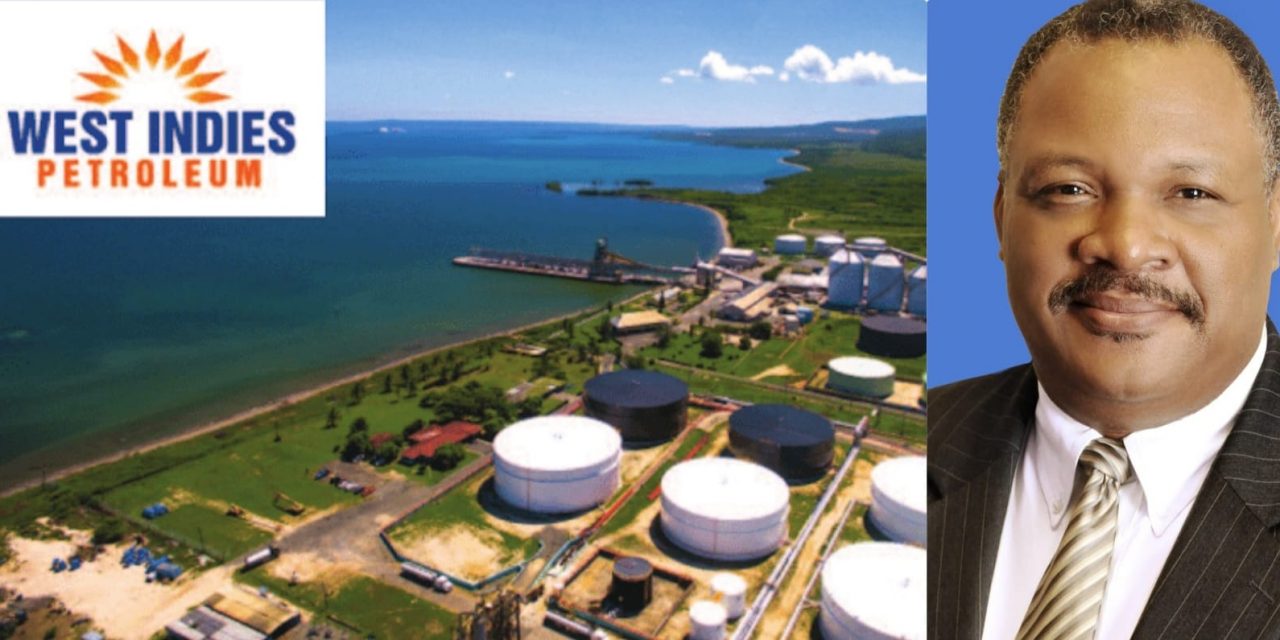 Energy and bunkering company, West Indies Petroleum Limited, WIPL, is firing back at questions asked in parliament by Opposition Spokesman on Finance, Julian Robinson about a Common External Tariff, CET, waiver it was granted noting that it had to contend with a protracted delay before accessing the relief which was automatically granted to a host of international companies which also legally qualified for the waiver.

The opposition spokesman asked the finance minister to indicate the rationale for the granting of the waiver and the value of the waiver in terms of revenues foregone by the Government of Jamaica.

WIPL pushed back in a statement to the media on Sunday, which was issued under the name of its senior vice president, Danville Walker. The company said it finds the enquiry by the opposition spokesman “curious and misguided” because it is of the view that the pertinent question is “why was WIPL for a protracted period of time denied the waiver when the relief was automatically granted to a range of players in the market?”

WIPL did not disclose which other companies reportedly accessed the CET waiver. However, it’s understood that several overseas based multi-national fuel importers, who do business in Jamaica, have been granted a similar CET waiver, along with the state owned oil refinery, Petrojam.

The statement from West Indies Petroleum says “the fact is despite WIPL – which is a Jamaica-based company owned by Jamaicans, having qualified for the waiver, baseless and legally unsound reasons were put forward to deny the company the relief that was approved for several other companies which also qualified for same”.

WIPL says when the waiver was to be renewed, inexplicably, it had to wait four months while obstacles were placed in its way to deny it the relief which was given to several other international companies.

The bunkering company, which has been doing business in Jamaica and the region for over a decade, said it is therefore compelled to ask – “why is it easy for overseas companies to get every opportunity to do business in Jamaica, but it appears that obstacles are invented and placed in the way of established Jamaican-owned companies?”

According to WIPL, it is also compelled to question why is it “being victimised and forced to spend our resources to fight for a level playing field in its own country?”

WIPL said it would be good if Mr. Robinson would indicate whether he believes that the CET should be reimposed for all players in the market or WIPL should continue to be victimised and discriminated against.

The company says the fact is if the CET is reimposed across the board on all importers, then the price at the pumps will increase and in addition, all players would be getting the same treatment in the industry.

WIPL also wrote in its detailed response to Mr. Robinson that in the interest of full transparency, it will detail a chronology of events which includes its appeal of the initial decision of the Finance Minister to deny WIPL the waiver. WIPL says the appeal was pursued while relying on legal and legitimate grounds.

WIPL says on February 1 last year it submitted its application for suspension of the CET in respect of Mogas 84 and 88 to the Ministry of Science, Energy and Technology, MSET. WIPL says it sought an extension of the tax relief to be granted for the period January 1 last year to December 31 this year.

According to WIPL, after submission of the application, the Ministry of Industry, Investment and Commerce (MIIC) contacted it and advised it to revise its application in several respects and to direct the revised application to MIIC.

WIPL says subsequent to submitting its application, the MIIC requested several documents in furtherance of the approval process. WIPL says it complied with all the requests.

According to WIPL on February 2, 2021, it received an email from the industry ministry, which requested that its company complete a Caricom Approved Suspension Form.

WIPL says it complied with the request and submitted the Caricom Approved Suspension Form. The company says on or about April 7, 2021, it was verbally informed that its request was denied by the Ministry of Finance. WIPL says it did not understand why its application was denied given the Council of Trade and Economic Development, COTED, secretary general’s approval.

WIPL noted that it has complied with the procedure required for the application for the suspension/waiver of the CET which includes the procedure set out in Caribbean Community Law.

WIPL explained in its statement that it moved to challenge the reasons for the decision to deny it the waiver which was that the applicant must have been a consistent customer of a regional supplier prior to Petrotrin closing its operation or the applicant is new and/or was benefiting from a concessional arrangement in the past.

According to West Indies Petroleum, as it pursued its appeal it noted that the reasons proffered lack credible basis because the conditions alluded are not consistent with Caribbean Community law and in particular Article 83(2).

WIPL says it also argued that the conditions cited by technocrats for denying it the waiver are ultra vires, arbitrary and discriminatory. WIPL says it objected to being completely excluded from obtaining a benefit which had been expressly outlined under CARICOM law and is reportedly applicable to the company.

The Jamaica-based fuel company says its attorney also pointed out that local suppliers of fuel who compete with WIPL currently enjoy the tax relief along with several overseas based entities.

WIPL says the criteria imposed by the Minister of Finance and Public Service therefore puts it at a significant disadvantage and it is concerned that the measures may be designed to keep the company out of the fuel market.

In its lengthy riposte to the questions posed by Mr. Robinson, WIPL said it must also be noted that the CET on the relevant products was suspended by COTED in 2018 and WIPL will never qualify for the suspension of CET if conditions not supported in law which were cited by the finance ministry are upheld.

According to WIPL, on the basis of the foregoing, it expressed its belief that it is just and fair that the decision to deny it the waiver be reversed. The entity says its legal advice is that “the inexplicable decision of the Ministry of Finance is inconsistent with Caribbean Community Law”. WIPL says it also complied with the procedures outlined and qualified for the CET waiver. The company reiterated that it “was granted approval by COTED as required via the appropriate authority”.

The energy company concluded its statement by revealing that its attorney had also pointed out in clear terms that the decision to deny it the waiver should be revisited and that it has urged that a decision be arrived at in reasonable time so that if adverse, it would be given time to appeal, as necessary to the Caribbean Court of Justice for relief.

WIPL says it insists on a level playing field and further pushed back against Robinson. According to West Indies Petroleum, the opposition spokesman on finance should indicate whether he believes the CET waiver should be applied evenly and fairly, including to Jamaican-based and owned companies, or whether what it described as “an unjust atmosphere of victimisation and discrimination” should be allowed to prevail.