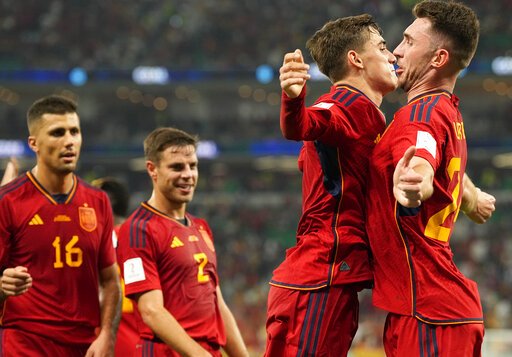 Spain shredded Costa Rica 7-nil in a brutal destruction in their Group E opener which launched their bid to lift a second World Cup.

Four-time champions Germany are in danger of exiting the World Cup in the group stage for the second tournament in a row after losing 2-1 to Japan in their opening game at Qatar 2022.

Germany – who finished bottom of their group in 2018, behind Sweden, Mexico and South Korea – led Japan 1-0 at half-time in their Group E opener courtesy of an Ilkay Gundogan penalty.

But the team 24th in the FIFA World Rankings stormed back after the interval thanks to goals from substitutes Ritsu Doan and Takuma Asano.

A loss to Luis Enrique’s side would likely result in elimination.

Meanwhile, Morocco held 2018 World Cup runners-up Croatia to a nil-all draw as both teams took a point to open their Qatar campaigns.

And Belgium kicked off their campaign with an unconvincing 1-nil win over Canada.

The result saw the Red Devils go top of Group F, with Canada in last place after the first round of fixtures.

But those positions could easily have been reversed had the North Americans taken just a fraction of their chances.

Canada ended the game having registered 22 shots – 13 more than Belgium.

But they breached the Canadian defense just before half-time.