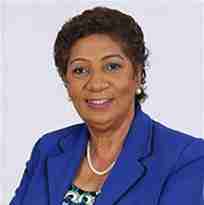 The Chairman of the Airports Authority of Jamaica, the AAJ, Fay Hutchinson, is denying that she was either a shareholder or a director of First Rock Capital Holdings at the time of a multi-million dollar investment.

She’s demanding a retraction and apology from The Gleaner newspaper.

Simultaneously, the opposition People’s National Party, PNP, intensified its call for her to resign from the board.

In a letter to the Editor in Chief of the Gleaner Company Limited, a copy of which was sent to Nationwide News, attorneys representing Mrs. Hutchinson deny that she was a shareholder and board member of First Rock Capital Holdings when the board of the AAJ decided to invest in the company.

The letter says in February 2020 when the AAJ board approved an equity participation in the Initial Public Offering, IPO, of First Rock Capital Holdings, Mrs. Hutchinson was a minority shareholder.

It says this means she had less than one percent of the shares in First Rock.

The letter goes on to say at the time, Mrs. Hutchinson was neither a Director of First Rock Capital Holdings nor was she the chairman of the Airports Authority of Jamaica.

Mrs. Hutchinson’s attorneys deny that she has ever been a member of the board of the Norman Manley International Airport.

The letter says government regulations state that a shareholder would need to hold in excess of five percent of the total issued shares of a company to have a material interest.

The letter says in that regard, all protocols were followed by Mrs. Hutchinson.

Mrs. Hutchinson’s attorneys say in March 2020, she was invited to join the board of First Rock Capital Holdings in a personal capacity, and not as a representative or appointee of the AAJ.

Her attorneys note that during the period Mrs. Hutchinson served as a member of the First Rock board, the AAJ did not purchase or sell any shares in the company.

The letter says statements being published are sensational and conform to a culture of misinformation.

Mrs. Hutchinson’s lawyers accuse The Gleaner of deliberately trying to malign her good character and decades of good stewardship.

According to her lawyers it would be in the interest of all concerned that a full retraction be made, and an apology issued to her by the publishers within seven days.

Mrs. Hutchinson’s attorneys say failure to do so will result in her pursuing legal action against The Gleaner.

And the Opposition People’s National Party, PNP, is calling for the removal of Mrs. Hutchinson.

The call comes amid questions about a multi-million dollar investment into First Rock Capital Holdings.

The investment of $409-million was made in breach of Government of Jamaica policy which forbids public bodies from investing in private companies without prior approval of the Finance Ministry.

The Opposition Spokesman on Transport is also raising concerns about what he says is the silence of the Transport Minister, Robert Montague, regarding the investment.