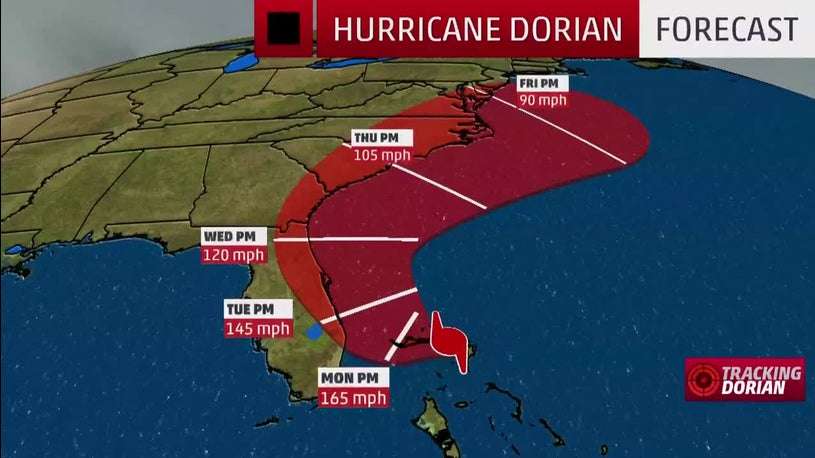 Five people have been confirmed dead so far as a powerful Category 4 Hurricane Dorian, continues to pound parts of the Bahamas.

Residents of the northern Bahamas are now virtual prisoners in their own homes as they shelter from the devastation of Dorian.

The Hurricane made landfall yesterday wreaking havoc across sections of the archipelago as it slowly creeps towards the US State of Florida.

An eight-year-old boy has been confirmed dead, as flood waters sweep through the north of the country.

Videos of those stranded by the devastating effects of Dorian have gone viral on social media as the hurricane is crawling at two kilometres per hour.

Hurricane Dorian made landfall in the northern section of the Bahamas on the weekend as a devastating category 5 storm.

Since then, Dorian has virtually sat on the island, moving slower than walking pace at 2 km/h.

Dorian has been dumping massive amounts of rain on the island.

That coupled with maximum sustained wind speeds which now stand at 234 km/p have killed five people.

That’s according to Prime Minister of the Bahamas, Dr. Hubert Minnis.

The sweeping devastation meted out by the hurricane can be seen in homes that have been reduced to rubble.

Light poles and trees are strewn across streets and residents are pleading for help.

The Hurricane centre is also warning that the heavy rains could produce life-threatening flash floods over the northern portion of the Bahamas.

The Hurricane Centre says life-threatening storm surges and hurricane force winds are expected in sections of Florida and the east coast of Georgia in the United States.