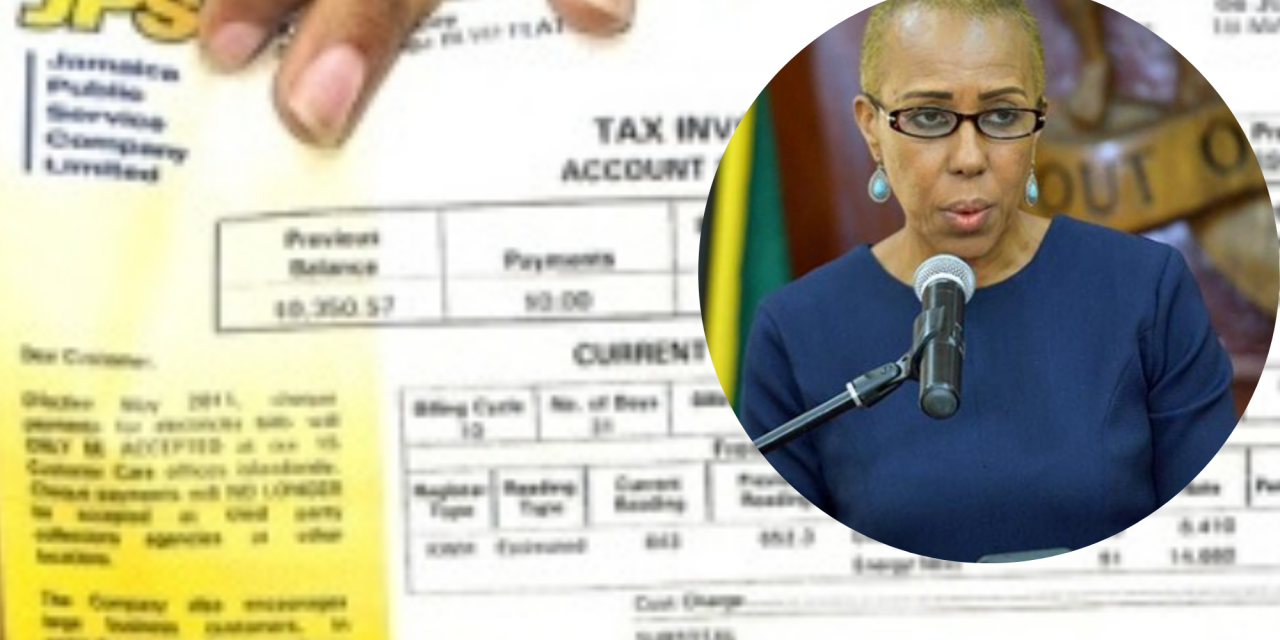 Energy Minister Fayval Williams says she has asked the Office of Utilities Regulation, OUR, to initiate an audit into the Jamaica Public Service Company, JPS.

Her disclosure while speaking on Nationwide this morning comes amid widespread and exponential increases in electricity bills.

Minister Williams says he has already spoken to the Head of the OUR on the matter.

She says the audit request will be made in writing today.

Pressure is increasing on the Jamaica Public Service Company, JPS to explain a major spike in the light bills of many Jamaicans.

Attorney General and West Central St. James MP, Marlene Malahoo Forte say JPS is obliged to answer to the people via the Government of Jamaica.

Malahoo Forte says the foreign exchange rate does not appear to be a credible excuse for the major spike.

She says the excuse that more people have been staying home due to Covid-19 and hence bills have skyrocketed due to additional consumption also does not appear to be an acceptable excuse for the major spike.

The Government MP says something is clearly wrong and JPS must provide an explanation.

Earlier, the West Central St. James MP also tweeted that the unusually high light bills many people have received from JPS point to a huge problem that must be resolved as a matter of urgency.

The Government MP says delayed response by JPS to queries and complaints from consumers is aggravating the situation.

South Central St. Catherine MP and Former Energy Minister, Dr. Andrew Wheatley, also triggered a conversation on Twitter yesterday when he declared that it appears JPS has held the people of Jamaica hostage.

Many Jamaicans have been complaining over the past few months that their JPS bills have increased by as much as fifty, 1-hundred and even 1-thousand percent!

This despite no visible change in the consumption pattern.

The JPS has sought to attribute the increase to more people staying home due to the Covid-19 crisis.

Meanwhile, the Energy Ministry says it has taken note of the concerns of the public relating to the high cost of electricity.

In a statement yesterday, the Ministry said it understands the concerns of the people.

The Ministry says it also recognizes that the high cost of electricity could pose a barrier to access especially for Jamaicans who are low income earners.

The statement quotes Energy Minister, Fayval Williams as saying the Ministry is also mindful of the fact that due to the impact of COVID-19, many Jamaicans are facing increased economic hardship.

However, the Minister is reminding Jamaicans that the JPS operates in a regulated environment with rates set by the Office of Utilities Regulation, OUR.

The Ministry say the rates are set in a transparent manner that requires public consultation.

Minister Williams says the Act also provides for the OUR to carry out investigations to determine whether the interests of consumers are adequately protected.

She says Jamaicans may use the provisions in the law to challenge the JPS.

Minister Williams says for example, if a customer is dissatisfied with what is represented on his or her electricity bill, that customer could bring a complaint to the OUR about the JPS.

Minister Williams says the solution to the cost of electricity must be strategically addressed by accelerating the pace at which Jamaica increases the mix of renewable energy in electricity generation.

The Energy Minister says that goal is a primary focus of the Ministry for this fiscal year and beyond.