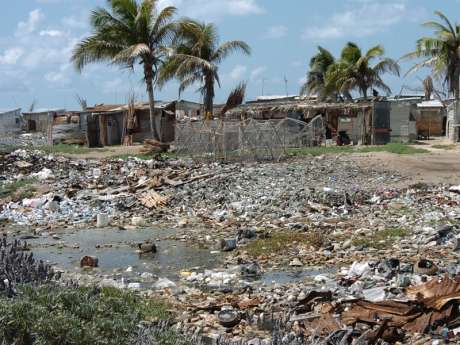 The Ministry of Agriculture and Fisheries is contemplating allowing fisherfolk on the Pedro Cays to take care of solid waste management there, instead of the National Solid Waste Management Authority, the NSWMA.

That’s according to the Permanent Secretary in the Ministry, Donovan Stanberry.

His revelation comes after the National Environment and Planning Agency, NEPA, last week served enforcement action on the Ministry and the National Land Agency because of inappropriate solid waste management at the Pedro Cays.

On Friday, Nationwide News also reported that the Fisheries Management and Development Fund had complained to Agriculture and Fisheries Minister, Derrick Kellier, about what it believed was the NSWMA’s poor management of waste at the Pedro Cays.

Its complaint was made in a letter to Minister Kellier in January.

In making its complaint, the Board of the Fund wanted the NSWMA to be relieved of direct responsibility for sanitation management and garbage collection at the Cays — preferring instead to have the work contracted to third-party entities.

Mr. Stanberry this afternoon told Nationwide News the Ministry is responding to that call.


In its letter to Minister Kellier, the Board of the Fisheries Management and Development Fund made it clear that it had lost confidence in the NSWMA to deal with sanitation management on the Cays.

In that January 2015 letter, the Board said the NSWMA had not collected garbage at the Cays in September, October, November and December of 2014 — despite claiming it had done so.

Mr. Stanberry has also revealed that the National Contracts Commission, NCC, is now to approve a tender process for toilets to be built on the Pedro Cays.

NEPA last Wednesday served two enforcement notices on the Agriculture and Fisheries Ministry and the National Land Agency, citing failure to install appropriately designed management system for the containment, treatment and disposal of human faeces and urine at the Pedro Cays.

They’ve also been cited for the accumulation of solid waste at the Cays due to the absence of appropriate waste management provisions.

They’ve been given 30 days to comply with the notice — failing which further enforcement action will be taken.

The notices become effective on April 24.

Mr. Stanberry is defending his Ministry against the enforcement action served against it by NEPA.

He says his Ministry is not responsible for sanitation management and garbage collection on the Pedro Cays.

Donovan Stanberry, Permanent Secretary in the Agriculture and Fisheries Ministry.

He says despite this, since 2013, the Agriculture and Fisheries Ministry has provided requisite funding to the NSWMA for garbage collection at the Pedro Cays on a periodic basis

Mr. Stanberry says this was done given the public health situation that could arise.