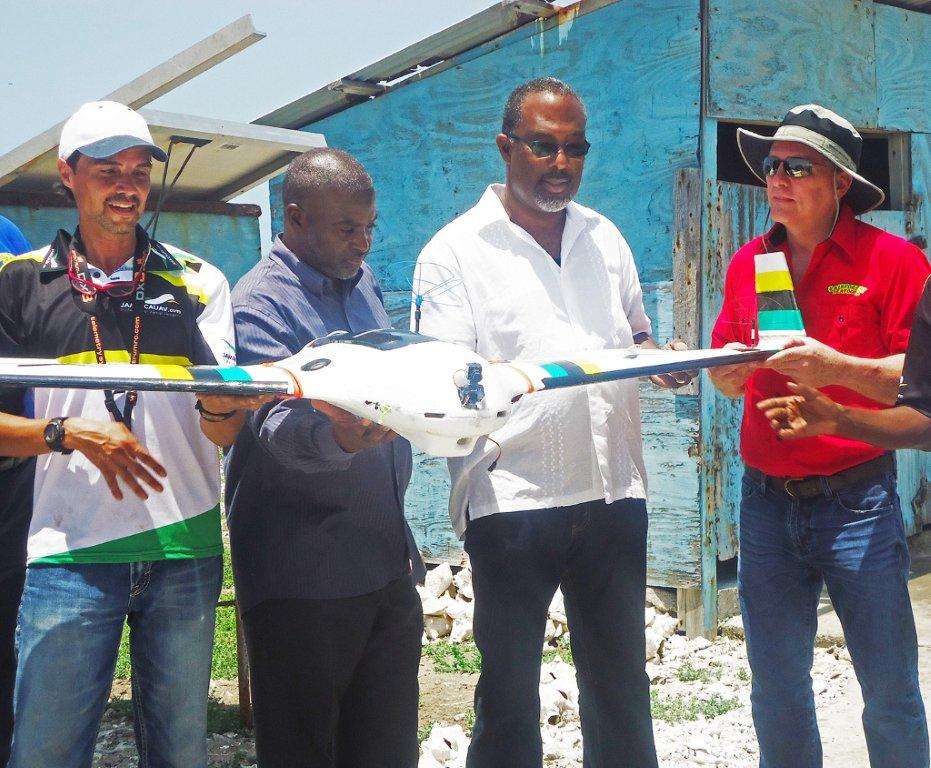 The way is now clear for the deployment of drones to better monitor Jamaica’s marine space and detect and deter illegal, unreported and unregulated (IUU) fishing in the island’s fishing territory.

This has been made possible with the completion of the final of five test flights of unmanned aerial vehicles (drones) at the Pedro Cays on Thursday, April 23, bringing the pilot project to a close.

Jamaica is said to be one of the most over fished countries in the Caribbean and Latin American region and is currently a net importer of fish and fish products with imports placed at US$135M and exports at US$35M in 2013.

Jamaica’s marine fishery production has continued to suffer a drastic and rapid decline due to poaching and environmental. The drone pilot project was conceptualised to test drones as well as their live video feed capabilities within the marine environment with a view to increasing law enforcement within the island’s maritime jurisdiction.

With funding and sponsorship from Rainforest Seafoods Limited, the Fisheries Management and Development Fund and the Jamaica UAV, the pilot project was conducted by a task force, under the leadership of the Fisheries Division of the Ministry of Agriculture and Fisheries and involving stakeholders from the Ministry of National Security, Jamaica Civil Aviation Authority, the Jamaica Defence Force, the Marine Police, Jamaica UAV, Fisheries Management and Development Fund and Rainforest Seafoods Limited.

The statedaim of the project was “to provide a roadmap and basis upon which appropriate actions can be taken to facilitate the conducting of UAV (drone) operations within Jamaica’s maritime jurisdiction in a safe, effective and efficient manner to detect, deter and assist in the detention of vessels engaged in illegal activities, as well as facilitate maritime search and rescue operations”.

Implementation was made possible through the donation of one drone by the Jamaica Robotics and Avionics Design Group to the Ministry of Agriculture and Fisheries to patrol the island’s maritime jurisdiction as well as the donationof an X8 Skywalker drone by Jamaica UAV, specifically for testing purposes, while Rainforest Seafood Limited donated US$5,000and the Fisheries Development and Management Fund also provided funding.

The test flights were completed exactly one year after former Agriculture and Fisheries Minister, the late Roger Clarke, announced the Ministry’s intention in his budget presentation in Parliament.

Minister Clarke said then that “Inan effort to bolster our surveillance and monitoring of our vast marine space, and also to increase safety at sea, the Ministry is in consultation with the Jamaica Defence Force Coast Guard and the Marine Police to acquire two UAVs. These UAVs will be fitted with cameras and be deployed as necessary, and will have the capacity to transmit data back to base which will assist in detecting and deterring poachers, as well as assist with search and rescue at sea.”

Observing the final test flights on Thursday, Minister of State for Agriculture, Labour and Social Security, the Hon. Luther Buchanan, who has direct responsibility for the Fisheries portfolio, said surveillance by the drones would aid Jamaica to maximise the true potential of its fisheries industry.

Minister Buchanan also told the fisherfolk on the Middle Cays, Pedro Cays that the drones would aid in rescue missions. In light of the various challenges on the cays, the state minister explained that the use of the drones would help to make fishing more sustainable and counteract poaching from illegal foreign fishers. He urged the fishers to give their full cooperation to ensure the environmental sustainability and viability of the Pedro Cays.
Minister Buchanan was accompanied on his tour of the cays by Ministry officials, members of the All Island Fisheries Development Alliance and a team from Rainforest, led by CEO Brian Jardim.