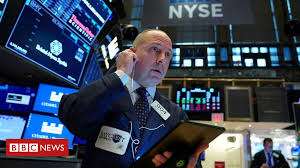 The three main indexes in the US have fallen by about 3 per cent, while the UK’s FTSE 100 share index closed 3-point-3 per cent lower, the sharpest drop since January 2016.

In Italy, which has seen Europe’s worst outbreak of the virus, Milan’s stock market plunged nearly 6 per cent.

In contrast, the price of gold, which is considered less risky, hit its highest level in seven years.

The moves came as the outbreak continued to spread outside of China, with Iran, South Korea and Italy reporting a surge in cases.

About 77 thousand people in China, where the virus emerged last year, have been infected and nearly 2 thousand 600 have died.

More than 1,200 cases have been confirmed in about 30 other countries and there have been more than 20 deaths.