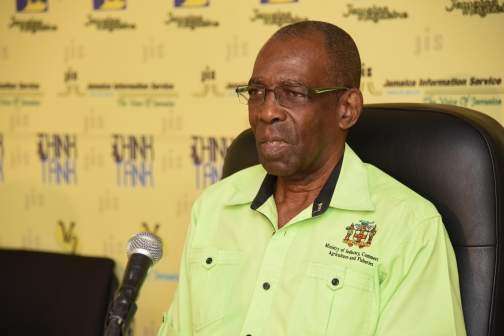 Minister with responsibility for Agriculture, JC Hutchinson, is denying wrongdoing in a land deal involving Holland Producers Limited, a company that his common-law wife is a shareholder and director.

Mr. Hutchinson is also Member of Parliament for North West St. Elizabeth, where the property is located.

The 24-hundred acre property is owned by the Sugar Company of Jamaica, SCJ.

Mr. Hutchinson admits to writing to the SCJ recommending that the land be turned over to Holland Producers immediately.

However, he says he made the recommendation in order to prevent squatting, as well as destruction by animals roaming on land.

He says it didn’t matter to him which company was awarded the right to use the property.

The Minister says he was also not aware of his common law wife, Lola Marshall Williams’ involvement with Holland Producers Limited.

Nor was he aware that his son had registered a farm store business to operate on the property, on the same day that the Holland Producers was incorporated.

He’s insisting that there was no nepotism and no conflict of interest in making the recommendation for Holland Producers to occupy the land.

He says the farmers from the area came together and decided that a company should be formed, and selected Williams as one of the directors.

He says despite him making the recommendation, it was the SCJ that should’ve decided whether to put the contract to tender.

In the meantime, the Opposition People’s National Party, PNP, is calling for Minister Hutchinson to resign his post as Minister and Member of Parliament for North Western St Elizabeth.

In a statement today, the PNP says information now in the public domain relating to the 2-thousand 400 acres Holland Sugar Estate Lands, proves beyond any doubt that Minister Hutchinson was involved in a conflict of interest.

According to the PNP, Minister Hutchinson is also involved in a breach of government’s land divestment policy and the abuse of Ministerial power and authority.

It says Mr Hutchinson also failed to declare spousal business transactions with the government in the interest of transparency.

PNP Shadow Minister of Justice, Senator Donna Scott Mottley, said the Minister was duty-bound to declare that the beneficiaries were connected parties.

The PNP says in this case, Minister Hutchinson’s partner, Mrs Lola Marshall Williams and his son, Jason Hutchinson, are domiciled with him, which is a clear connection to the Minister.

The PNP says the Minister’s statement to the media that the land was given by the SCJ Holdings on a moratorium for one year conflicts with statements that there is no lease.

The Opposition party says an audit announced by the Rural Agricultural Development Authority RADA, will not suffice.

And that is why the PNP wants the Integrity Commission to conduct a full investigation.