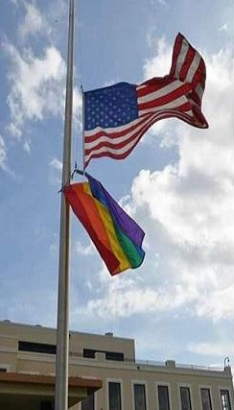 The BBC also notes that Jamaica has laws criminalising gay sex and that rights groups have warned that LGBT persons face frequent discrimination.

In her post, Mrs Malahoo Forte said: “I strongly condemn #OrlandoNightClubShooting but find it disrespectful of Jamaica’s laws to have #RainbowFlag flown here. #MyPersonalView.”

The post which has since been deleted received much backlash.

The US embassy also asked Mrs. Malahoo Forte to explain her legal reasoning. However, at least two religious groups have since expressed support for the Attorney General.

Public Affairs Officer at the US Embassy, Joshua Polacheck says as the highest authority in the country they will take the Prime Minister’s statements as speaking for all Jamaicans.

Forty-nine people died when a gunman opened fire in a gay club in Florida last week.

The US embassy in Kingston joined other US missions around the world in flying the rainbow flag in solidarity with the victims of the attack.