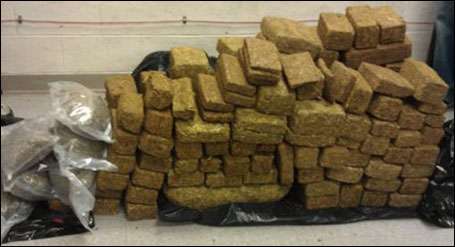 The Police seized over a tonne of ganja worth over $6-million in Whitehouse, Westmoreland on Monday night.

Reports are that about 10:45 Monday night, lawmen were on operation in the area when they attempted to intercept two motor vehicles.

The drivers of both vehicles, however, sped away.

The vehicles were later found abandoned on a minor road in the community.

A search of the motor cars revealed 34 knitted bags containing 324 parcels of ganja.

The Detectives assigned to the Narcotics Division says the illicit drug seized weighed over 1600 pounds.

The drug has an estimated street value of JMD over $6.7-million.