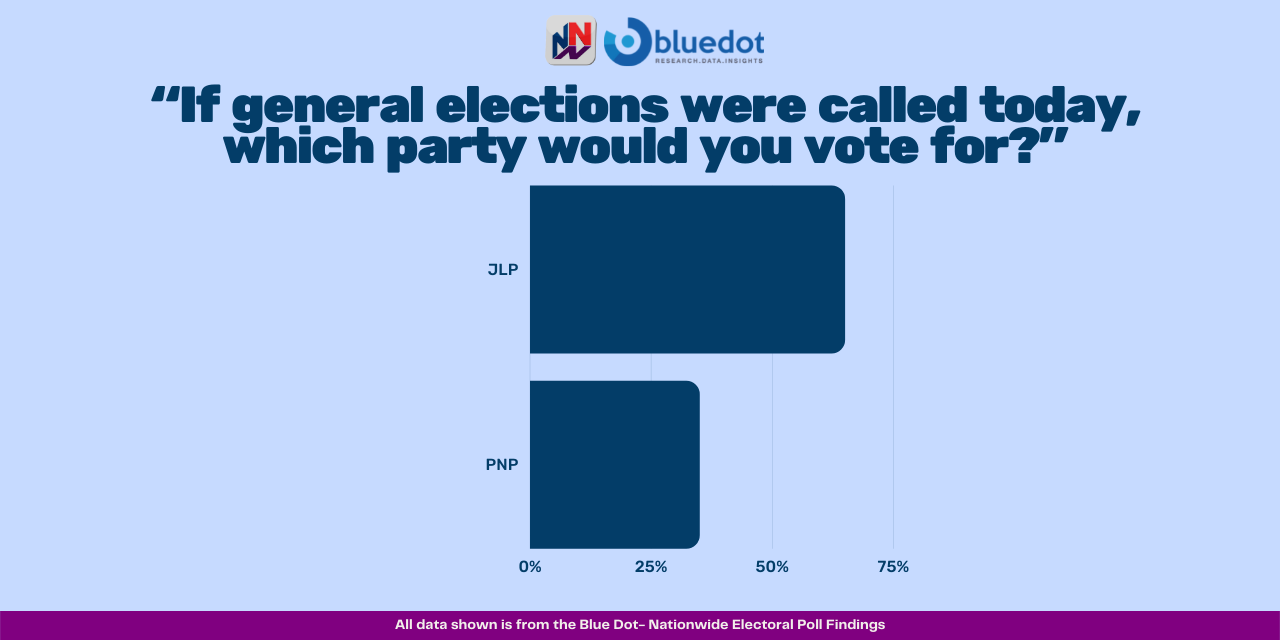 The governing Jamaica Labour Party has opened up a massive 30-point lead over the opposition People’s National Party in the latest Nationwide Bluedot polls as the preferred choice to run the country.

The poll was conducted among 1500 Jamaicans between August 14 and 30, 18 years and older, across all 63 constituencies.

The poll has also found that both parties have lost ground over the last year.

But a huge majority of Jamaicans have greater confidence in the ability of the Andrew Holness-led JLP to manage the Covid19 pandemic and govern the country at this time than the Mark Golding-led PNP.

Bluedot asked those it surveyed “If general elections were called today, which party would you vote for?” A massive 65-percent said the JLP. 35-percent, the PNP.

Compared to last August, on the eve of the September 3, general elections, those preferring the JLP has moved from 52-percent to 65-percent.

While those opting for the PNP remain steady at 35-percent compared to 34-percent one year ago.

The party preferences of the Jamaican voters seem to be heavily influenced by their perceptions of which of the two major political parties is better able to govern the country in the midst of the Covid19 pandemic.

When asked which party are you most confident in to manage Jamaica’s Covid19 pandemic recovery, 75-percent said the JLP.

Only 22 -percent said the PNP.

Similarly, when asked which party are you most confident in to govern the country at this time, 71-percent said the JLP.

The Bluedot pollsters sought to probe the 1500 Jamaicans on their sentiments about the JLP and the PNP. Both have fallen. But the PNP is in dire straits.

The internal splits and public disputes over its leadership and direction are taking a heavy toll on how the party is perceived by Jamaicans.

So much so that it’s not even able to benefit from the losses the JLP have suffered over the last year in managing the fallout from the Covid19 pandemic.

Positive sentiments about the governing party has plunged by 17-percentage points. From 53-percent a year ago to 36-percent now.

For the PNP, one year ago 34-percent of the public had positive feelings about it. That’s now down 15-percentage points to 19-percent.

According to Bluedot, approval of the PNP is even lower, with a mere 19-percent viewing it in a positive light.

The numbers indicate that the PNP is underwater.

As the percentage of people who view it negatively, 22-percent, outnumber those who see the party in a positive light.

According to Bluedot, 48-percent of Jamaicans, almost 1 in two, described themselves as neutral, having neither positive nor negative sentiments about the two major political parties.

One year ago, 43-percent of those polled, identified themselves as supporters of the JLP.

Similarly, one year ago, 33-percent say they were PNP supporters, that’s down 9-points to 24-percent. Last year 21-percent identified themselves as neutral, that’s now doubled to 41-percent. Indicating that both parties have lost ground over the past year.

The Nationwide Bluedot poll has a margin of error of 2.5-percent.