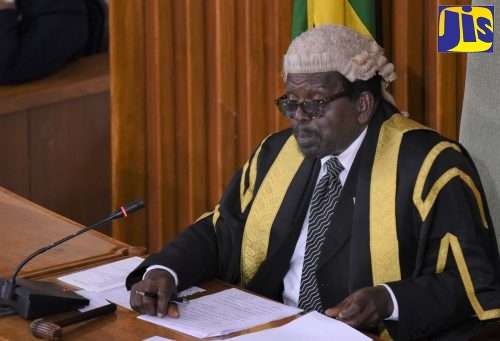 Parliament again descended into chaos as a stand-off unfolded in the House of Representatives this afternoon after the Speaker, Pearnel Charles, urged Parliamentarians not to debate elements of the Auditor General’s Special report on the scandal-hit, Caribbean Maritime University, CMU.

The Speaker says this could be prejudicial to ongoing criminal proceedings.

His decision triggered outrage among opposition MPs who described the move as an attempt to silence Parliament.

It was a tough-talking Speaker of the House, Pearnel Charles, who told MPs he would not entertain debate on the report.

Mr. Charles says the constitution guarantees protection against actions which may prejudice any case before the courts.

He’s referring to the trial of former Education Minister, Ruel Reid, and CMU President Fritz Pinnock, among others for fraud charges.

Mr. Charles also took issue with the discussion of certain elements of the report by the media.

However, Members of the Opposition criticized the Speaker for the position taken.

Opposition Leader, Dr. Peter Phillips, rose to question the decision only to be stopped by Mr. Charles.

He was joined by MP for Central Kingston, Rev. Ronald Thwaites, who chastised the Speaker for blocking a matter already in the public domain.

The Auditor General’s report cited concerns of mismanagement and poor governance at the CMU.