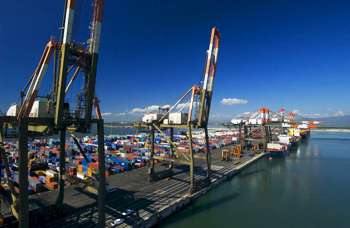 The Port Authority of Jamaica, says it has signed a contract worth at least USD$7-million or JMD$840-million, with the French based company Soget, to implement a Port Community System, PCS, as part of plans to establish the island as a major node in the global logistics hub.

Nationwide News had asked the PAJ on Tuesday to say why it had not published the signing of a contract of that magnitude.

But according to the authority it had publicized the signing in an advertorial carried in both the Gleaner and the Observer on December 2.

Soget operates out of Spain, Denmark, Russia, Italy and France.

It posted a press release on its website, saying it had signed a deal, in collaboration with a French company named Bureau Veritas, to establish a PCS in Jamaica.

A PCS is an electronic platform which connects the multiple systems operated by a variety of organizations that make up a seaport, airport or inland port community.

Bureau Veritas is listed as a world leader in laboratory testing, inspection and certification services.

During Wednesday’s Jamaica House briefing, we asked Minister with responsibility for Information, Senator Sandrea Falconer, about the PCS contract.

She told us she was not aware of those negotiations and was unsure if any deal had been reached.

But in an e-mailed response to our news centre today, the Port Authority says the PCS contract was signed on November 20.

The main ICT provider for the PCS is Microsoft Corporation.

The Port Authority says the the PCS is intended to integrate the various players in the Port Community, such as Jamaica Customs, shipping agents, freight forwarders, terminal operators, truckers and custom brokers.

The system will enable paperless trade transactions along the supply chain.