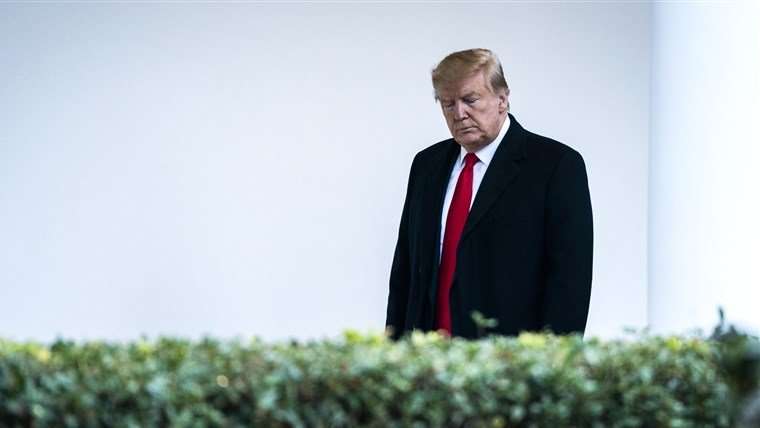 US President Donald Trump has been taken to hospital less than 24 hours after testing positive for coronavirus.

He arrived at the Walter Reed National Military Medical Centre shortly before 6 in the evening on Friday.

Wearing a mask and suit, the president walked out across the White House lawn this afternoon to his helicopter, Marine One, for the short trip to hospital.

He waved and gave a thumbs-up to reporters but said nothing before boarding the aircraft.

According to a memo from the President’s physician, he received a dose of an experimental Regeneron treatment.

Mr Trump began exhibiting “mild symptoms” of Covid-19 on Thursday after disclosing that he and his wife had gone into quarantine late Wednesday.

Before leaving for the hospital President Trump posted a video to his twitter account where he said he thinks ‘he’s doing very well’.

Meanwhile, all election campaign events featuring US President Donald Trump and his family will be held virtually or temporarily postponed.

The announcement was made by the Trump campaign which said all other campaign events will be considered on a case-by-case basis.

The statement added that Vice President Mike Pence, who has tested negative for COVID-19, plans to resume his scheduled campaign events.

The vice presidential debate between Mr. Pence and Democratic U.S. Senator Kamala Harris will go ahead as scheduled on October 7.

The Commission on Presidential Debates, which oversees the events, said there were no plans to scrap the running mates’ debate in Utah on Wednesday.

Meanwhile, officials in Pennsylvania, New Jersey and Minnesota urged hundreds of people who attended President Trump’s campaign events in those states this week to get tested for COVID-19.

On Wednesday, Trump held an outdoor campaign rally in Duluth, Minnesota with hundreds of attendees.

Video shows Trump tossing campaign caps into the crowd, not all of whom were wearing masks.