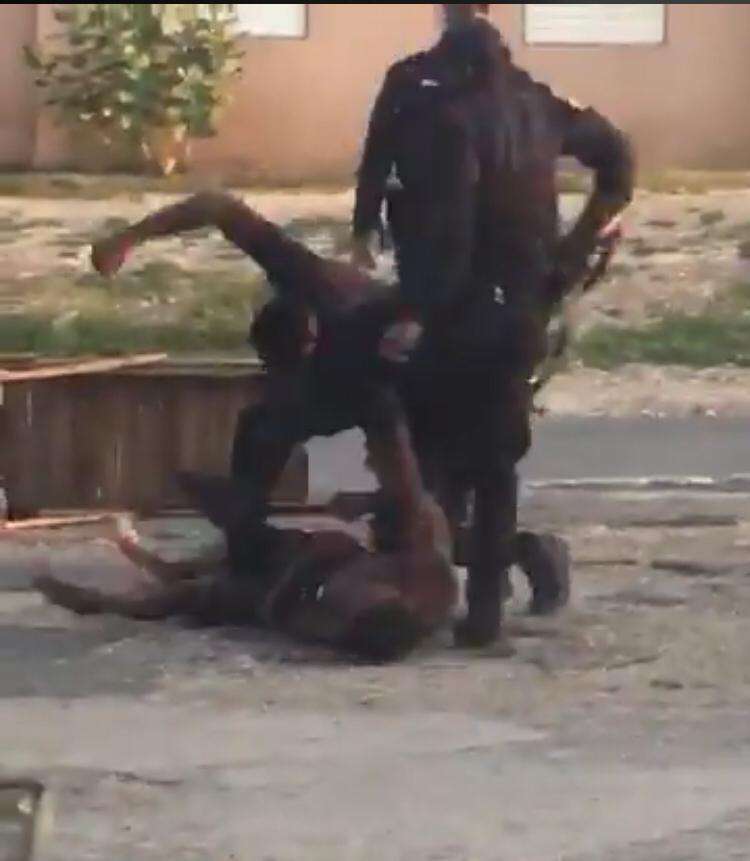 Residents of Denham Town in West Kingston demonstrated this afternoon against what they say is the abusive treatment meted out by the police to a resident of the area.

This after a video of the police taking a man into custody went viral.

In the video, multiple members of the Constabulary can be seen trying to subdue the man in question.

At least one member of the Constabulary can be seen kicking the man in the head, twice.

The Police High Command and the Independent Commission of Investigations have since launched probes into the incident.

A 30-second clip of the video of the incident first went viral on social media yesterday afternoon.

In the short clip, a shirtless man is seen apparently wrestling with a group of policemen.

One of the lawmen is seen throwing and pinning the man to the ground while another appeared to kick him in the face and in the head.

Hours later a longer version of the video began circulating on social media.

In the more than three-minute long video, a man can be seen being escorted from the top floor of a building in a section of Denham Town known as John Crow Town.

Here are the early exchanges between the police and the man in question.

Another member of the constabulary then proceeded to kick the man in the head.

The shirtless man was then kicked in the face while he was on the ground.

There’ve reportedly been tensions in the area between the community and lawmen in the days leading up to the incident that was caught on video.

Those tensions boiled over again when about 1-hundred people used debris to block Nelson St in Denham Town in protest.

The police eventually cleared the debris and dispersed the crowd.

The Constabulary’s Inspectorate and Professional Oversight Bureau, IPROB has launched an investigation into the incident.

The independent Commission of Investigations, INDECOM, says the man who’s being taken into custody has filed a complaint with the oversight body.

INDECOM is appealing to any who may have witnessed the incident or who can provide additional footage to come forward.