Coronavirus: Trump says US in good shape to meet ‘peak’ 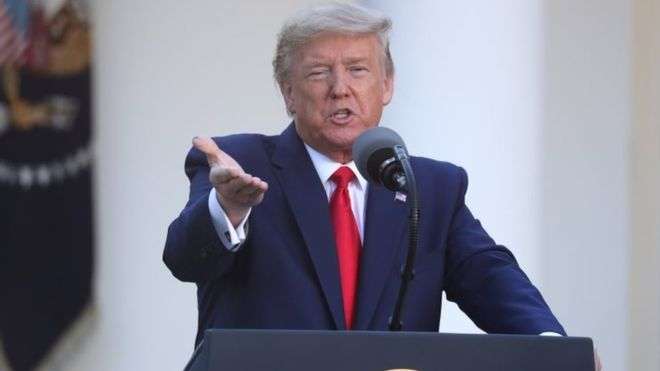 Donald Trump has said the US will be in “a very good shape” in terms of the number of ventilators available by the time the coronavirus outbreak peaks.

The president said at least 10 US companies were now making the medical devices, and some might be exported.

The virus can cause severe respiratory issues as it attacks the lungs. Ventilators help keep patients breathing.

New York City is the worst-hit place in America, with 914 confirmed fatalities, according to Johns Hopkins University.

The US last week became the country with the most reported cases, ahead of Italy and China.

What did Trump say?

Speaking at Monday’s Coronavirus Task Force briefing at the White House, Mr Trump said: “We have now 10 companies at least making the ventilators, and we say go ahead because, honestly, other countries – they’ll never be able to do it.”

Asked whether there would be enough ventilators for all patients in the US who needed them during a predicted peak in infections in two weeks’ time, Mr Trump responded: “I think we going to be in a very good shape.”

He said more than a million Americans had been tested for the virus, “more than any other country by far. Not even close”.

He accused a reporter who pointed out that South Korea had tested proportionally more people when measured by population size of negativity.

And he added that he should be congratulated on his administration’s progress in fighting the virus.

Mr Trump also repeated his allegations that some US state governors were “hoarding” critical medical equipment, and that items including face masks were being stolen from hospitals. He gave no evidence for either claim.

Mr Trump said “challenging times are ahead for the next 30 days”, but that social distancing could save more than a million American lives.

“We will have a great victory,” he added.

Asked by a CNN correspondent whether his previous comments downplaying the threat of the outbreak were wrong, the president responded that they were “all true”.

“I don’t want panic in the country. I could cause panic much better than even you,” he told the reporter.

Mr Trump has been accused of slowness in implementing measures to stem the spread of the virus as he feared the economic impact could hurt his re-election prospects later this year.

“The economy is number two on my list, we’re going to save a lot of lives,” he insisted.

What’s the situation in the US?

Nationwide guidelines being implemented by many states say citizens must continue to avoid non-essential travel, going to work, and eating at restaurants or bars. Gatherings are limited to groups of under 10 people.

But stricter restrictions apply to millions in some of the worst-hit states.

On Saturday residents of New York, New Jersey and Connecticut were advised not to travel elsewhere within the country for 14 days.

In California, a “shelter in place” order remains.

What about the shortage of equipment?

Earlier on Sunday, Mr Trump accused hospitals in some states of “hoarding” ventilators, face masks and other critical medical supplies.

“We do have a problem with hoarding… including ventilators. Hospitals need to release them – in some cases they have too many, they have to release medical supplies and equipment,” he said.

Hospitals “can’t hold [ventilators] if they think there might be a problem weeks down the road”, he said, alleging that some were “stocked up”.

The availability of ventilators is a major concern among health professionals as demand has surged. A number of states have warned that they will soon not have enough to treat patients suffering from Covid-19.