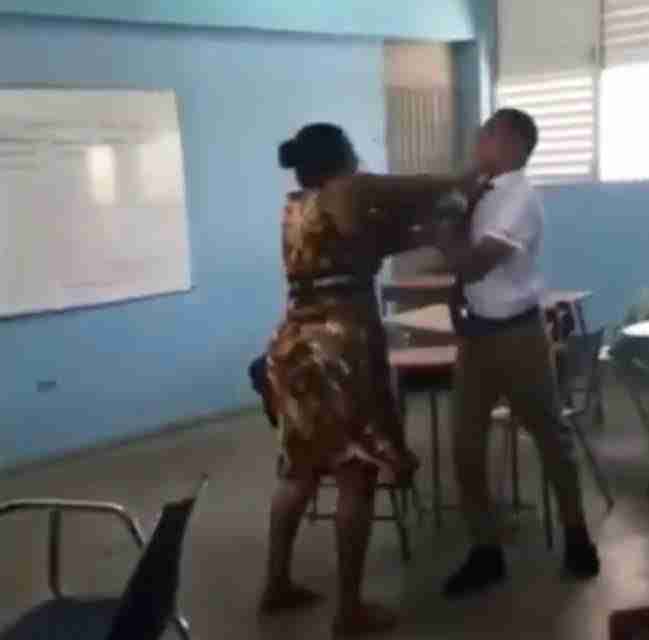 The 16-year-old Tivoli Gardens High School boy who was this month charged with assault occasioning actual bodily harm and malicious destruction of property is to return to court on September 7, 2022.

The teenager and a female teacher were captured on camera in a physical confrontation that sparked national concerns.

Both appeared in the Family Court today.

Speaking with our news team, attorney representing the 16-year-old boy, Vincent Wellesley, says the case was called up only for mentioning today.

Wellesley says he informed the judge that the teacher, who’s the complainant, should also be charged with assault.

According to Mr. Wellesley the teacher had hit his client in the face with a bag and that’s how the altercation started.

Both parties have given varying accounts of the incident.

Its reported that the teacher said the accused student disrupted a class, in an attempt to engage other students in a game of gamble.

The boy was reportedly told to leave but insisted on staying which caused an escalation, resulting in a physical tussle.

But the boy’s mother, Debraly Coleman, who spoke with our news team at the time, refuted such claims.

Coleman said her son told her he went into the classroom to buy sweets from another student.

In the video, the student was seen throwing punches at the teacher; the teacher retaliated, lifting a desk to hit the boy.

The video that went viral, stirred comments from the public, some labelling the teacher as the aggressor while others believe the student was in the wrong.

The police initially said they weren’t considering charges against the teacher.

But Wellesley says they are now in possession of a statement from his client indicating that he is a victim of assault.

Coleman told our news centre today that her son has completed his end of year examinations at Tivoli High and will return to school in September.