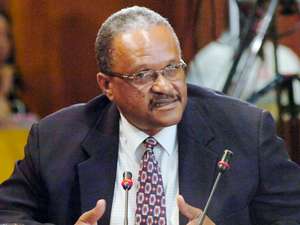 Former Chief of Defence Staff, Major General Stewart Saunders, says Christopher ‘Dudus’ Coke, became aware of a request for his extradition in August, 2009 within minutes of him having a briefing with former Prime Minister, Bruce Golding.

General Saunders led the JDF during the May 2010 security forces operation to capture Coke.

General Saunders gave that evidence as he began his testimony at the West Kingston Commission of Enquiry this morning.

He was being led through his evidence-in-chief by the attorney for the JDF, Linton Gordon.

General Saunders explained to the Commission why he believed that his information was credible.