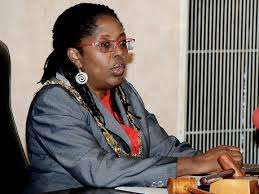 The Mayor of Kingston and Chairman of the Kingston and St. Andrew Corporation, KSAC, Angella Brown-Burke, is questioning the motive behind this morning’s boycott of the Council’s monthly meeting by JLP Councillors.

The 15 JLP Councillors did not show in protest at what they say is the Council’s tardiness.

They say they’re tired of getting the order papers at the last minute and not having enough time to prepare for the meetings.

The Mayor says there were problems in preparing the Order Paper in time for today’s meeting but it has not been a consistent problem.

Earlier, the leader of the JLP Caucus, Winston Ennis, said the tardiness in receiving order papers has been an ongoing problem but has got worse recently.

Councillor Winston Ennis, the leader of the Minority Caucus in the KSAC.

The order papers contain resolutions to be considered at meetings, as well as other information.

Mayor Brown Burke says they’re usually prepared and issued on the Friday morning before the Council meetings held on the second Tuesday of every month.
—30—