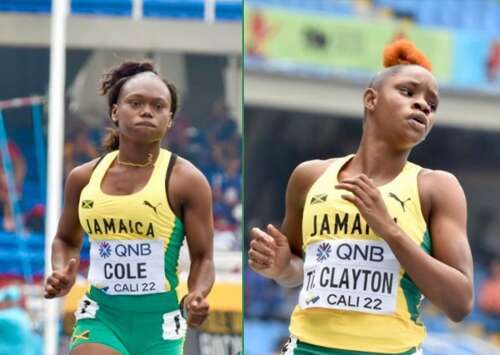 Jamaica’s bagged first and second in the finals of the women’s U20 100m World Championships, with Tina Clayton setting a championship record in defending her crown.

Clayton, who’s tipped by many as one for the future of Jamaican sprinting, blazed down the track in 10.95 seconds. That breaks her own previous national junior record of 10.96 seconds which she ran in Kingston.

Clayton’s time also became a new championship record. That time would have seen the 17-year-old qualify for the finals of the women’s 100m event at the recently concluded World Champions in Eugene, Oregon.

Earlier in the day, reigning back-to-back double Olympic champion, Elaine Thompson-Herah ran 10.95 seconds to mine gold in the women’s 100 metre finals at the Commonwealth Games, in Birmingham, England.

The medals didn’t stop there for Jamaica. Fellow sprinter, Serena Cole, took silver in 11.14 seconds to complete the double for Jamaica. The USA’s Shawnti Jackson finished third for the bronze.