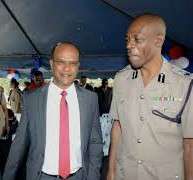 Mr. Bunting says the murder figures come from a very complex set of circumstances, including a lack of professionalism within the police.

He says Dr. Williams has been instrumental in addressing that issue.