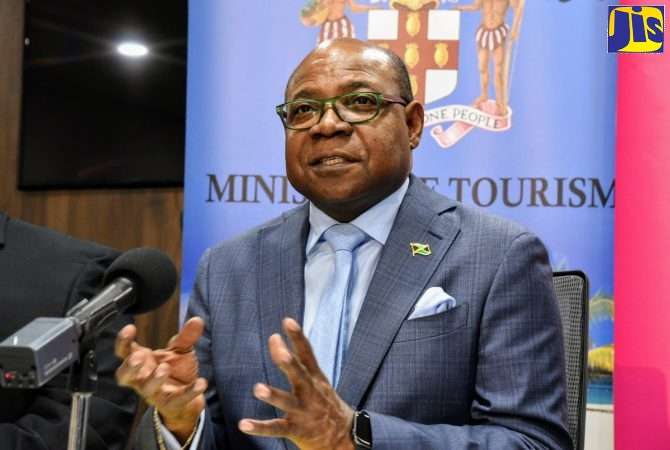 Jamaica remains a safe destination and is doing everything possible to prevent the Coronavirus from arriving on the nation’s shores.

That’s the word this afternoon from portfolio Minister, Edmund Bartlett, to Tourism stakeholders across the world.

Minister Bartlett says it’s important to note that Jamaica is taking no chances as it relates to the virus.

Minister Bartlett says it’s also important that stakeholders understand that Jamaica is serious about maintaining its standing as a safe tourism destination.

He was speaking yesterday on Nationwide: This Morning.

Meantime, the AFP is reporting that a passenger jet taking winter-weary Canadians to Jamaica yesterday was forced to turn back after a passenger falsely claimed to have the coronavirus.

Spokesman Morgan Bell told AFP The Westjet flight to Montego Bay was diverted to Toronto on Monday “due to an unruly guest,”.

According to the airline, out of an abundance of caution, its crew followed all protocols for infectious disease on board, including sequestering an individual who made an unfounded claim regarding coronavirus.

According to reports, the man stood almost halfway through the four-hour flight carrying 243 passengers and, while taking selfies, declared that he had contracted the virus that has infected more than 20-thousand people across the world.

Flight attendants gave him a mask and gloves and ordered him to the back of the plane.

Another passenger on the plane, Julie-Anne Broderick told public broadcaster in Canada CBC that the prankster ran a selfish joke which affected over 2-hundred-and-40-people.

Police and public health officials met the flight on arrival in Toronto.

Peel Regional Police confirmed that a 29-year-old man from Thornhill, Ontario was arrested and has been charged with mischief.

Meanwhile, another flight was booked to take the passengers to Jamaica Tuesday morning and bring back those left stranded in Montego Bay after their return flight on Monday was also canceled.

Meantime, the Caribbean Media Corporation, CMC is reporting that Antigua and Barbuda has become the latest CARICOM territory to prevent the cruise ship, AIDA-Perla from docking.

The cruise ship has more than 3-thousand passengers on board.

A spokesperson from the Ministry of Health and Wellness in Antigua said that officials had reviewed the situation on the cruise ship in the context of provisions of the Maritime Health Declaration.

According to the Antigua official, following the review, it was discovered that it was insufficient to make a proper assessment of the health situation on the vessel.

Health authorities in St Lucia and Dominica, in denying the ship entry, said that some passengers were experiencing respiratory tract infections.

The authorities in St. Lucia and Dominica denied reports that there may have been cases of the Coronavirus.

The World Health Organization, WHO, has declared the Coronavirus a global health emergency.

But CMC says St Vincent and the Grenadines Prime Minister, Dr Ralph Gonsalves, speaking on a radio programme, defended the decision to allow the cruise ship to enter the Kingstown harbour.

Prime Minister Gonsalves says St. Vincent has to act sensibly with regard for protocols and not panic.