Jota To Stay On With Liverpool Till 2027 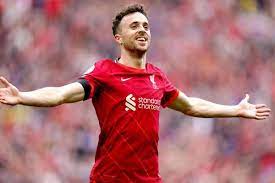 Liverpool forward Diogo Jota has signed a new contract keeping him at the club until 2027.

The Portugal international has scored 34 goals in 85 games since joining from Wolves in 2020 for 41-million pound sterling.

He scored 21 goals last season as Liverpool won the FA Cup and EFL Cup and finished as runners-up in the Premier League and Champions League.

Jota, whose current deal was due to expire in 2025, has missed pre-season with a hamstring injury and said he would be out for “a few more weeks”.

Manager Jurgen Klopp said: “As a striker who can play on the wing, he gives us so many options and since he came to Liverpool he has improved so much.