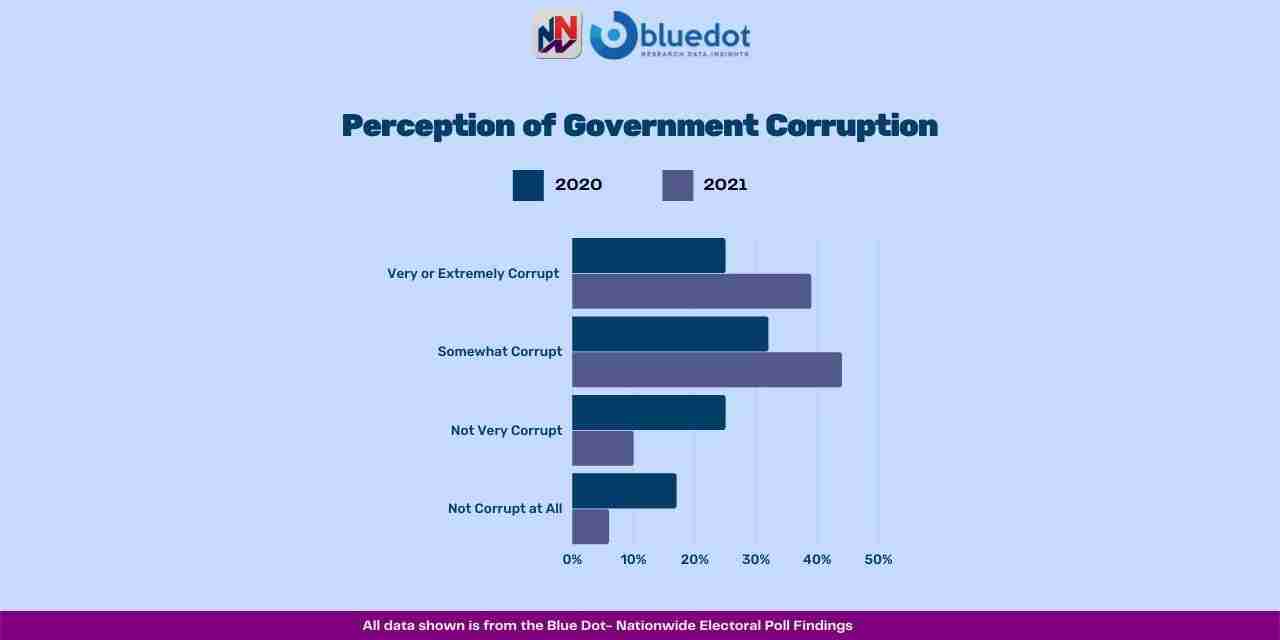 There’s been a sharp increase in the number of Jamaicans who believe the administration is very corrupt when compared to one year ago.

That’s the finding of the Nationwide Bluedot Poll conducted last month between August 14 and 30 among 1500 Jamaicans 18 years and older.

Only 25-percent of Jamaicans polled one year ago by Bluedot thought the government was very, or extremely corrupt. Now, that figure has jumped to 39-percent.

16-percent said the government was extremely corrupt while 23-percent described them as very corrupt.

Another significant block, 44-percent, of those surveyed said the government was somewhat corrupt. One year ago those who had that perception of the government was 32-percent. So that’s a worrying increase of almost 38-percent in one year.

Only 6-percent of the sample of more than 15-hundred Jamaicans interviewed said the Holness administration was not at all corrupt. And ten-percent said it wasn’t very corrupt.

The perception that the government is corrupt has strengthened as one year ago 17-percent said it was not at all corrupt. That has plunged by more 60-percent to only 6-percent still of that view.

While those saying it’s not very corrupt plunged by 15-percentage points from 25-percent last year.

The Nationwide Bluedot poll was conducted across the island in the last two weeks of August. It has a margin of error of 2-point-5-percent.

She shared the view that in these times, democracies are under pressure and many feel as if they cannot trust those in authority.

According to Ms Spence, the level of low trust eventually leads to the perception that corruption exists.

Ms. Spence says the vast amount of information accessible to the public including the large numbers of misinformed sources, has had an influence on people’s perception of the authorities.