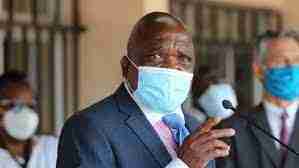 South Africa’s Health Minister says there is “absolutely no need to panic” over the new coronavirus variant Omicron, despite a surge in cases.

South Africa also condemned the travel bans imposed on the country, saying they should be lifted immediately.

The UK, EU and US are among those who earlier imposed travel bans on South Africa and other regional states.

Omicron has been classed as a “variant of concern” with early evidence suggesting it has a heightened re-infection risk.

The heavily mutated variant was detected in South Africa earlier this month and then reported to the World Health Organization, WHO, last Wednesday.

Omicron has now been detected in a number of countries around the world, including the UK, Germany, Australia and Israel.