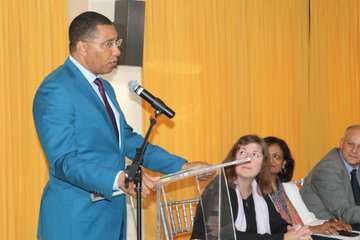 Prime Minister Andrew Holness says the International Monetary Fund, IMF, has helped Jamaica to foster a culture of fiscal responsibility, that is leaving the country in good stead now that the agreement with the international lending agency is complete.

Jamaica has successfully completed its borrowing relationship with the Fund and must now look towards the post-IMF era.

When the Portia Simpson Miller-administration turned to the IMF in 2013, Jamaica’s economy was in crisis.

It was stagnant and debt-ridden.

And, Jamaica was struggling to recover from the global economic recession.

But, the economy has since rallied.

Prime Minister Holness is praising the IMF for partnering with Jamaica to help the country create a new culture of fiscal responsibility.

He says the country can no longer use the IMF as a shield when making economic decisions.

Meanwhile, Prime Minister Holness says there was a national consensus that Jamaica should have turned to the IMF during its economic crisis six years ago.

He’s calling on the country to again come together on other national issues which are at crisis levels such as crime and public sector reform.