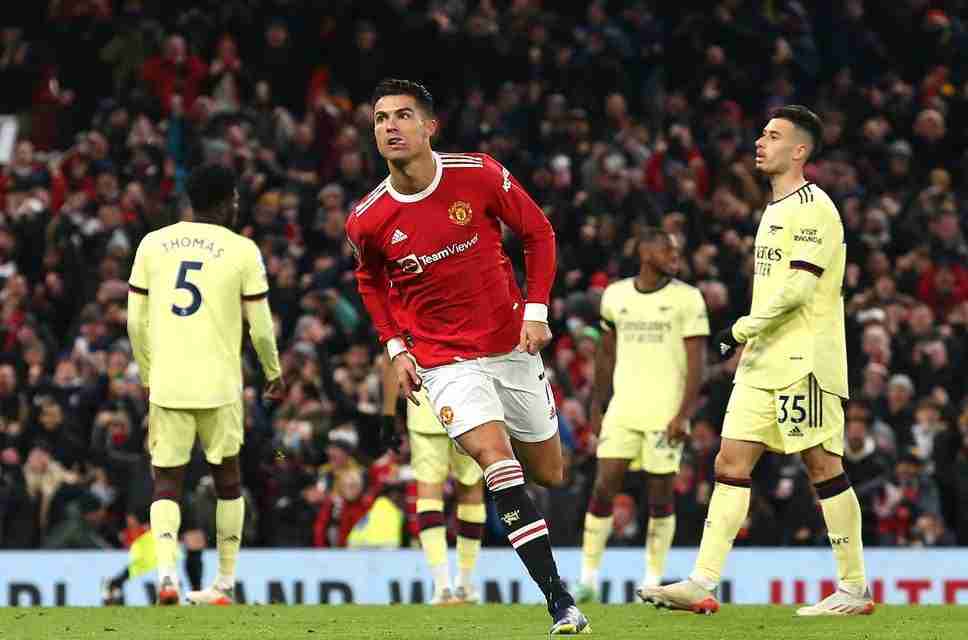 Manchester United beat Arsenal 3-2 at Old Trafford after going behind in bizarre circumstances.

Emile Smith-Rowe gave the Gunners the lead in the 13th minute after putting the ball into an empty net.

The goal came as Fred stood on David de Gea’s foot, following an Arsenal corner, and the Spaniard went down injured.

Referee Martin Atkinson didn’t blow his whistle to stop play before Smith-Rowe’s strike hit the back of the net and therefore the goal stood, as it was Fred who fouled his team mate.

Bruno Fernandes equalised in the 44th minute, following a good combination from Jadon Sancho and Fred.

Early in the second half Cristiano Ronaldo slotted home a Marcus Rashford cutback, to score his 800th career goal.

But three minutes later, Martin Odegaard scored with a similar finish to Ronaldo, to bring the scores level once again.

Following a challenge by Odegaard on Fred in the penalty area, which Atkinson gave a penalty for, following a VAR check, Ronaldo smashed the ball down the middle past Aaron Ramsdale, to make it 3-2.

In the other results, Tottenham beat Brentford 2-0.

Meanwhile, following the game, Michael Carrick announced that he’ll be leaving Manchester United after spending 15 years at the club as a player and a coach.

The midfielder joined Manchester United from Tottenham in 2006 after the departure of then United captain Roy Keane.

The Englishman managed United on an interim basis for three games, winning his first match against Villarreal 2-0 in the Champions, before drawing 1-1 with Chelsea on Sunday in the Premier League.

Carrick is making way for German coach, Ralf Rangnick to take charge of the Old Trafford outfit until the end of the season as United search for a permanent head coach after sacking Ole Gunnar Solskjaer last month.