Security Ministry Insists CP Was Pleaded with to Stay 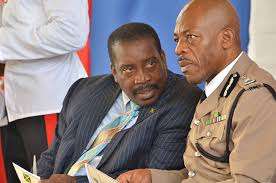 The Ministry of National Security says every attempt was made to have Dr. Williams extend his service.

That’s according to a statement from the Ministry today, confirming his early retirement, effective January 6, 2017.

In its statement this afternoon, the Ministry also confirms that Dr. Williams indicated his desire to retire from the JCF from October 18, this year.

It says numerous efforts were made by members of the administration, the Police Services Commission, PSC, and the Minister of National Security, Robert Montague, to have the Commissioner extend his service.

However, these efforts did not succeed.

It says the Ministry respects the Commissioner’s decision, knowing he has one of the most difficult and stressful jobs.

The Ministry noted that Dr. Williams has given over 30 years of service to the country, adding that he’s one of the finest public servants in Jamaica.

National Security Ministry is also assuring the public that there are qualified and competent persons in the Police High Command, to which PSC will firstly choose an appropriate person to act for 90 days.

It says it will be engaging the PSC to re-examine the terms of engagement for Commissioner of Police as the search begins for a suitable replacement within 90 days.

In the meantime, it says the Police High Command is assuring the public that now more than ever, and in tribute to Dr. Carl Williams, the brave men and women of the JCF will redouble their efforts to ensure the safety of civilians, and peaceful enjoyment of the season.