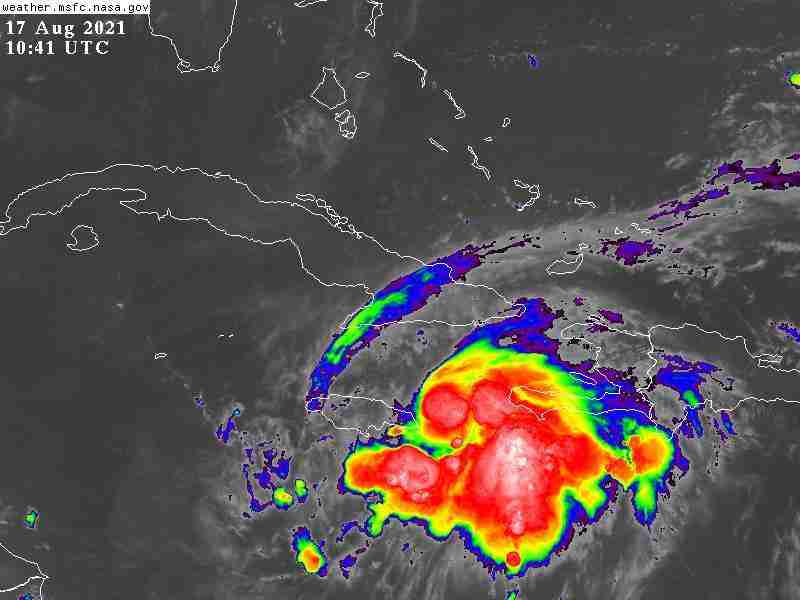 8AM UPDATE: advisory issued at 8:00am today by the Met Service says Tropical Storm Grace continues to head towards the island & is 20 miles east of Port Antonio & 120 miles East of Montego Bay, Jamaica.

Tropical Storm warning remains in effect for the island.

6AM UPDATE: A Tropical Storm Warning has been issued for Jamaica.

The Meteorological Service says Jamaicans should continue to brace for heavy rain and wind on Tuesday (today) as Tropical Storm Grace begins to move away from Haiti and towards the island.

Grace is expected to begin impacting the island in the next few hours.

A Tropical Storm Warning means that Tropical Storm conditions, including possible sustained wind speeds of between 63 to 118 kilometres per hour are expected to impact the island in 36 hours or less.

The latest update issued by the Meteorological Service at 6:30 this morning (Tuesday) says the centre of Tropical Storm Grace was located about 106 kilometres or 66 miles east of Port Antonio in Portland, Jamaica.

Maximum sustained winds are now near 65-kilometres or 40 miles per hour with higher gusts.

The Tropical Storm is moving towards the west at near 26 kilometres per hour, which is 16-miles per hour.

On the forecast track, the centre of Grace will be moving away from Haiti and closer to the northeastern coast of Jamaica on Tuesday morning, then continue westward along the coastline towards the Cayman Islands this afternoon during tonight.

The storm is expected to strengthen during the next few days.

Tropical-storm-force winds extend outward up to 45 miles from the centre of the system.

A general westward to west-northwestward motion is expected during the next several days.

Tropical Storm Grace is expected to produce between 100 to 150 millimetres or 4 to 6 inches of rainfall over Jamaica today as it releases widespread showers and thunderstorms across the island.

The Met Service says flash flooding and landslides should be expected in Jamaica.

Strong, gusty winds will also be experienced, mainly over northern parishes as the tropical storm moves close to the coast.

Sea conditions will continue to deteriorate today, especially north of the island, and marine interests are advised to remain in port until all warning messages have been lifted and sea conditions have returned to normal.

The Meteorological Service says it continues to monitor the progress of Tropical Storm Grace, and all interests must pay special attention to further updates.

The next Bulletin on Tropical Storm Grace will be issued at 8:00 this morning (Tuesday).