US Elections: Counting of Ballots in Pennsylvania To Finish Ahead of Schedule 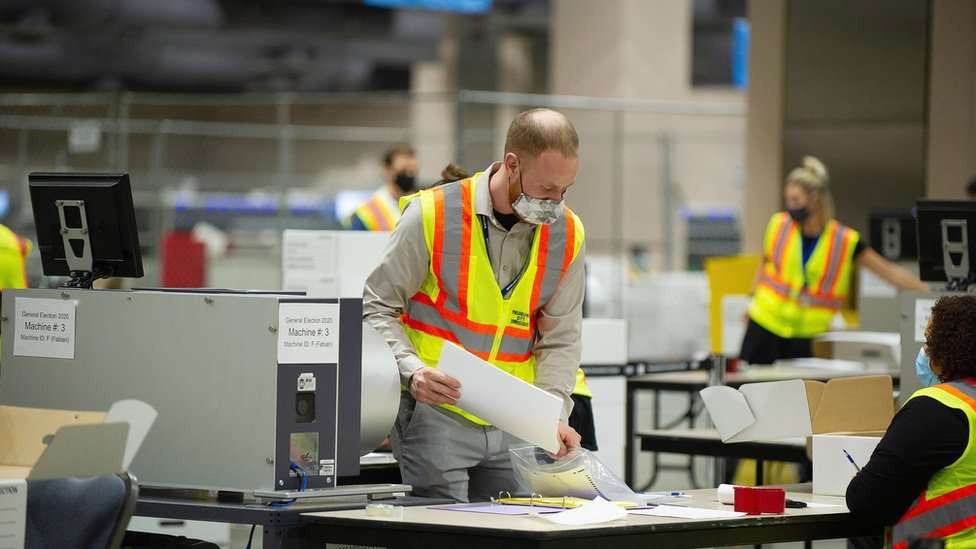 Today could be the crucial day in the US Election as officials indicate they expect to wrap up the counting of ballots ahead of schedule in the key state of Pennsylvania.

The vote count is continuing amid several legal challenges that have been mounted by the Donald Trump camp.

The ongoing counting in the US has also led to a number of protests overnight in some states.

More in this report.

Overnight he remains at 253  Electoral College Votes to Trump’s 214.

The final result hinges on the states of Arizona, Georgia, Nevada and Pennsylvania.

As the ballots continue to be counted, there’ve been several counter protests by Biden and Trump supporters.

But in Pennsylvania the counting continues.

Meanwhile, this morning Mr. Biden is feeling confident he’ll secure the Presidency once every vote is counted.

Both candidates are still on the pathway to 270 Electoral College Votes.

If Joe Biden holds the lead in Arizona and Nevada, he wins and Pennsylvania won’t matter.

But for President Trump to win he needs Pennsylvania plus a number of other states.

NO FRAUD DETECTED IN TUESDAY’s VOTING

Meanwhile, Jamaican Journalist and member of the international observer group, Democracy Wins, Janet Silvera, says she saw nothing fraudulent during Tuesday’s vote in the US.

Ms Silvera visited the battleground State of Ohio to observe the US election.

She says observing the US Presidential election was enlightening.

Ms Silvera is also hailing the preparation that went into the public awareness and education of voters ahead of the election during the pandemic.

Neika Lewis contributed to this report.