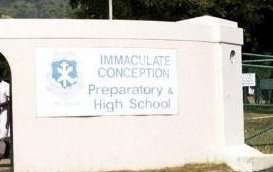 Sources indicate that the investigation has so far uncovered that some $30-million has been misappropriated from the A-list all girls institution.

That sum is set to increase as an audit intensifies.

Ricardo Brooks has been tracking the developments and files this report.

Auditors have been called in to examine the financial health of the Catholic all girls institution known for its record of excellence.

But all does not appear to be well.

Sources say it appears the school Bursar has fled. She has not returned to work since Friday February 5.

Allegations are she met with a group of auditors on February 4. She was asked to prepare information for the auditors by the following Tuesday.

When contacted this afternoon, officials at the top flight girls school were tight lipped as to how millions of dollars could have gone missing from one of Jamaica’s premier secondary institution.

Carol Anglin chairs the school’s board.

She refused to be drawn on the damning allegations swirling around the school.

Education consultant at the Roman Catholic Archdiocese of Kingston, Margaret Bolt, was similarly reluctant to give details.

She says she is aware that auditors are at the school. Ms. Bolt says she was told that the Bursar had not reported for school during some time last week.

But the Roman Catholic Archbishop of Kingston, Rev. Kenneth Richards, who has general oversight of the school, says he is aware of allegations of misappropriation of funds.

A place at Immaculate Conception High School is a highly sought after prize for many students sitting the PEP examinations. The school is consistently ranked among the top two institutions in the island.

Calls to the principal this afternoon were not answered.

The alleged fraud is said to go back several years.