China Orders US Consulate in Chengdu to Close as Tensions Rise 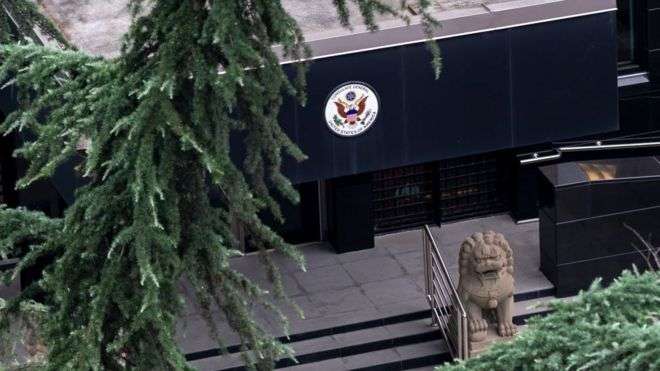 China has ordered the closure of the US consulate in the south-western city of Chengdu, in a tit-for-tat escalation between the two countries.

China said the move was a “necessary response” to the US, which ordered China to close its consulate in Houston earlier this week.

Secretary of State Mike Pompeo said the US decision was taken because China was “stealing” intellectual property.

Tensions have been rising between the US and China over several key issues.

President Donald Trump’s administration has clashed repeatedly with Beijing over trade and the coronavirus pandemic, as well as China’s imposition of a controversial new security law in Hong Kong.

China’s move came hours after Mr Pompeo hardened his tone further in a speech on Thursday at the library of former President Richard Nixon, whose 1972 China visit heralded a period of improved relations.

“Today, China is increasingly authoritarian at home, and more aggressive in its hostility to freedom everywhere else,” Mr Pompeo said.

“The free world must triumph over this new tyranny.”

What has China said?

China’s foreign ministry said the closure was a “legitimate and necessary response to the unreasonable actions taken by the United States”.

“The current situation between China and the United States is something China does not want to see, and the US bears all responsibility for that.”

China gave the US till Monday to close the consulate in Chengdu, according to the editor of China’s Global Times.

The mission, established in 1985 and currently having more than 200 staff – 150 hired locally – is seen as strategically important because it allows the US to gather information on the autonomous region of Tibet, where there has been long-running pressure for independence.

With its industry and growing services sector, Chengdu also is seen by the US as providing opportunities for exports of agricultural products, cars and machinery.

Why did the US order the Chinese consulate to close?

On Tuesday, the US government ordered China to close its consulate in Houston, Texas, by Friday.

The move came after unidentified individuals were filmed burning paper in bins in the building’s courtyard.

“We are setting out clear expectations for how the Chinese Communist Party is going to behave. And when they don’t, we’re going to take actions,” he said.

The Chinese consulate in Houston was one of five in the US, along with the embassy in Washington DC. It was not clear why it was singled out.

China’s foreign ministry spokeswoman said the reasons given by the US for closing the consulate were “unbelievably ridiculous”.

Hua Chunying urged the US to reverse its “erroneous decision”, or China would “react with firm countermeasures”.

In a further US move, four Chinese nationals have been charged with visa fraud for allegedly lying about their membership of China’s armed forces – three are under arrest while the FBI is seeking to arrest the fourth, who is said to be in China’s San Francisco consulate.