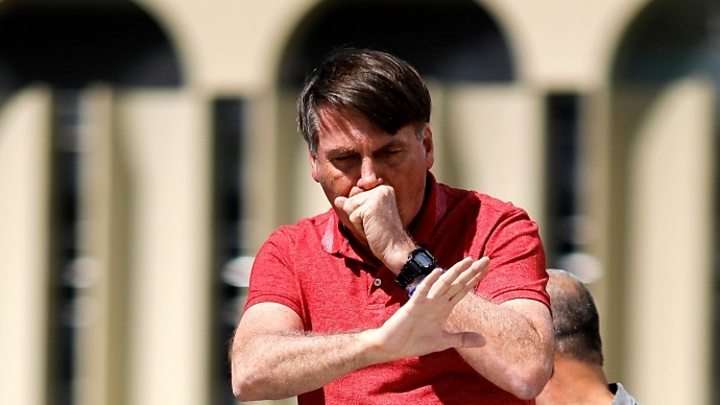 He took the test, his fourth, on Monday after developing symptoms, including a high temperature.

Mr Bolsonaro has repeatedly played down risks of what he has called the “little flu”, saying he would not be seriously affected. He has opposed lockdowns, which he says hurt the economy.

Brazil has the second-highest number of Covid-19 cases and deaths in the world, after the US.

What did Mr Bolsonaro say?

He made the announcement in a TV interview on Tuesday, saying the fever he had been experiencing had gone down and that he felt “very well”.

Mr. Bolsonaro said that he had started experiencing symptoms on Sunday. He said he had had a high temperature, a cough, and had felt unwell.

He added that on Monday he had felt worse, which prompted him to take the coronavirus test.

Mr Bolsonaro is in a higher-risk group because of his age, 65.

He said he was taking hydroxychloroquine – championed by US President Donald Trump – and azithromycin, an antibiotic, to treat the illness. Neither has been proven to be effective against the virus.