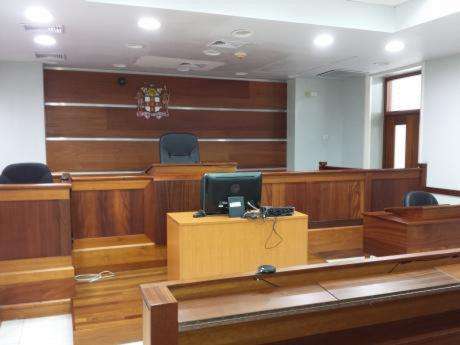 The Prosecution’s case in the Klansman One Don trial in the Supreme Court was dealt a major blow at this hour.

Some of the defendants in the trial have so far been found not guilty on 13 of 15 counts heard by Presiding Judge Chief Justice Bryan Sykes.

Justice Sykes has only found in at least instances so far that some of the accused have a case to answer.

Ricardo Brooks reports on the latest out of the keenly watched Klansman One Don trial………..

There are 25 counts on the indictment.

Twenty eight alleged members of the One Don faction of the Klansman gang are before the courts after five were earlier freed.

On Count 25 which deals with Conspiracy to Murder a person called Ice, all the defendants have been found Not Guilty.

Justice Sykes found the defendants not guilty due to the absence of evidence.

He reasoned that the Prosecution would’ve needed to establish who Ice was and if he was alive at the time they were conspiring to murder him.

On Count 22, Not guilty. The count was in relation to illegal possession of a firearm.

The Judge ruled that the accused Roel Taylor had no case to answer to.

He ruled similarly on Count 21, another Not guilty.

Count 21 also dealt with illegal possession of a firearm.

The defendant Joseph McDermott was found not guilty.

On Count 20, relating to the murder of a man at Phil’s Hardware in Spanish Town, Not Guilty.

Justice Sykes reasoned that there were very serious allegations being made and evidence must be available to prove it.

He says the count couldn’t stand and found Bryan and Ted Prince Not Guilty.

On Count 18, another Not Guilty.

The Crown conceded on that count which led to the defendant Lamar Simpson not having a case to answer.

On Count 17, the decision was split.

The count relates to the murder of a man identified as Tesha Bus driver in Spanish Town’s bus park on February 6, 2018.

The ones found not guilty are Ricardo Thomas, Michael Whitley and Brian Morris.

However Justice Sykes says on Count 17, Marco Miller, Chevroy Evans and Andre Golding have a case to answer.

On Count 4 relating to a conspiracy to murder a person called ‘Wee Wee’, another Not Guilty. Count 3, not guilty.

On Count 2, the Judge found that Jason ‘Citypuss’ Brown has a case to answer to in relation to being apart of a criminal organisation.

The matter has been adjourned with a resumption expected soon.