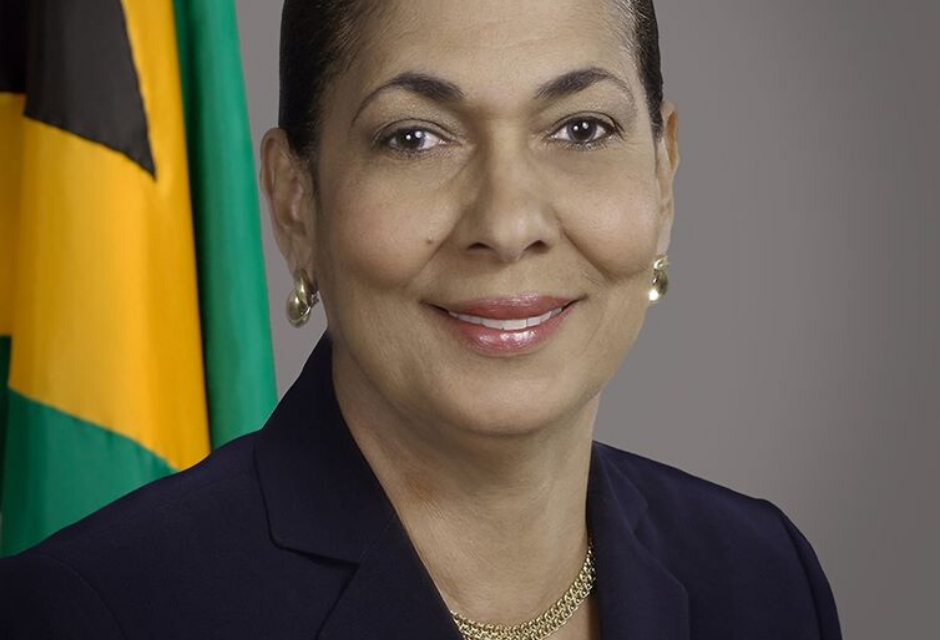 Shahine Elizabeth Fakhourie Robinson, Minister of Labour and Social Security and Member of Parliament for North East St. Ann and a beloved daughter of the garden parish. Dead at age 66.

Kalilah Reynolds looks back at the life and times of Minister Robinson:

At the time of her death, she was Member of Parliament for North East St. Ann.

Shahine Robinson catapulted to political stardom in the March 2001 by-election in the then PNP stronghold of North-East St. Ann.

She’s revered by members and supporters of the JLP because that famous by-election victory marked the beginning of the revival of the party’s political fortunes. In March 2001, it had languished in the political wilderness for 13 years.

Shahine, as she’s popularly called, pulled off a stunning victory. The PNP had a lock on North East St. Ann. It was considered safe PNP territory.

But her upset win signaled for many labourites a turning of the tide in the JLP’s now successful pushback against almost 2-decades of political dominance by the PJ Patterson-led PNP juggernaut.

She was tapped by then JLP Leader, Edward Seaga to work in North East St. Ann when the party’s then candidate, Michael Belnavis, took leave of absence.

The by-election was triggered by the resignation of the then MP Danny Melville.

She defeated the PNP’s Carol Jackson and went onto to transform North East St. Ann into a safe seat today for the JLP.

When Edward Seaga retired from politics in 2005, during his final speech to the Jamaican Parliament, an emotional Seaga paid tribute to Mrs. Robinson and Andrew Holness who’s now the country’s Prime Minister.

Controversy hit Mrs. Robinson in 2006 when it was discovered that she was a naturalized U.S. citizen who was sitting in the Jamaican Parliament contrary to the provisions of the constitution.

Robinson returned her U.S citizenship papers prior to the September 2007 general elections.Mrs. Robinson went on to defeat the PNP candidate Oswest Senior- Smith in that election by more than  2,000 votes.

But after the 2007 election, the PNP’s Manley Bowen, who was registered as a voter in Robinson’s constituency, sought a declaration from the Supreme Court that she was not qualified to be elected due to her alleged dual citizenship.

The petition was declared successful after Minister Robinson missed a court date.

The Court ordered her to pay legal costs to Mr. Bowen.

Mrs. Robinson had insisted that she didn’t intentionally break the law.

Robinson went through with the formal renunciation procedure, and obtained a Certificate of Loss of Nationality in December 2010.
She retained her seat in a by-election that month. She was sworn back in as an MP in January 2011.

Golding had resigned as Prime Minister and leader of the JLP.

Over the years, Shahine’s reputation as a key organizer and a beloved member of the JLP grew.

She was a key supporter of Prime Minister Andrew Holness’ push to stave of a challenge by Audley Shaw to his leadership of the JLP.
Minister Robinson served as Minister of Labour and Social Security from 2016 until the time of her passing.

She had served briefly as the Transport and Works Minister between late November 2011 and January 2012.

When Holness returned to Jamaica House as Prime Minister in March 2016 he appointed Minister Robinson as the country’s Labour and Social Security Minister.

Minister Robinson was given several key assignments – including being tasked to lead Jamaica’s assistance to the US Virgin Islands which was badly hit by a hurricane in 2017.

During her various contributions to the House of Representatives, Mrs. Robinson spoke passionately about developing Jamaica’s tourism product – in particular areas in her North East St. Ann constituency which are considered a hub for tourism in Jamaica.

In 2015 and 2016, she featured prominently in the JLP’s successful election campaign.

In one of her final public statements as Labour Minister, on March 26 this year, Minister Robinson vowed to take steps to protect the workers of Jamaica amidst the Covid-19 crisis.

During her final contribution to the House of Representatives a few weeks ago, Minister Robinson said she believes with consultation the various problems facing the Jamaican state may be fixed as the country strives for prosperity.

Mrs. Robinson graduated from Immaculate Conception High School in Jamaica and went on to Miami Dade College where she earned a degree in marketing and a diploma in public relations.