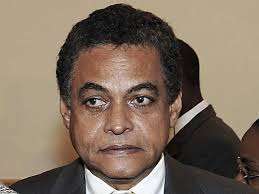 “There is no possibility of this kind of fire that you have seen here again!”

That’s the commitment of the Local Government Minister, Noel Arscott, today as he responded to questions about the fire at the Riverton City dump.

Almost half of the Jamaican population was exposed to the toxic smoke from the dump for almost two weeks.

During much of that time, Mr Arscott was away in Japan attending a UN conference.

Today, he defended his management of the crisis as he promised it will never happen again.

The fire at the Riverton City dump burned for twelve days. It released record levels of the cancer causing substance Benzene into the atmosphere.

The smoke blanketed the Corporate area, sections of St Catherine and Clarendon.

As the fire raged, several hundred people reported to hospitals and clinics with respiratory ailments.

Businesses and schools either closed or had to reduce hours and the sitting of the GSAT had to be pushed back by one week.

Today the Local Government Minister, Noel Arscott, says there will be not be repeat under his watch.


The Local Government Minister says the Simpson Miller administration is intensifying efforts to divest the dump in the medium term.

But he says some short term steps have been taken.

Minister Arscott has faced criticism for his management of his portfolio.

In his defence, Mr Arscott says the failure of the Finance Ministry to respond to a request for funding for the dump contributed to the recent disaster.

He makes it clear he has no intentions to step aside.

The Local Government Minister who was in Japan for the majority of the days the fire burnt says sorry to those affected.