Support for both Parties Plummet Since the Last General Elections 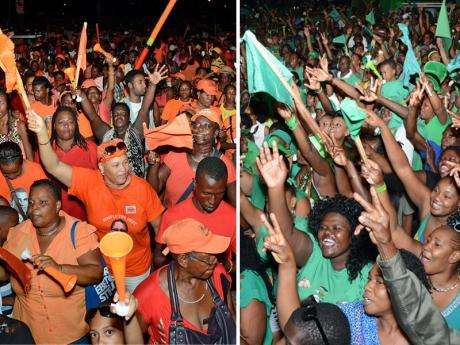 Support for both political parties has slipped since the last General Elections, but the Jamaica Labour Party still holds a significant lead over the PNP.

That’s according to data from the latest Nationwide News Bluedot Poll conducted in all 63 constituencies.

The Poll found that a plurality of Jamaicans consider themselves neutral in their political support.

Tauna Thomas has that story:

For the last two years over 40% of Jamaicans considered themselves neutral in their political leanings.

This is a dramatic increase in apathy compared to 24% in 2020 when general elections were last held.

Both parties enjoyed significantly greater support, in 2020 at 43% for the JLP and 33% for the PNP.

In terms of sentiments of the party, 39% of Jamaicans overall and 51% of voters in the last general elections viewed the JLP positively.

This compares favourably to the PNP which has only 25% positive sentiment overall and 32% among voters.

For the JLP this positivity fell from a high of 53% in the election year to 36% last year.

Golding’s party has closed the gap slightly this year and currently stands at 25%.

The JLP also dominates in terms of confidence in their ability to govern, at 36%, compared to 15% for the PNP.

However, there’s been a considerable erosion in confidence in the current government which has fallen from 71% in 2021.

The PNP inspired confidence in their governance ability in only 45% of respondents last year.

Meanwhile, a plurality of Jamaicans, 49%, say they would not vote or are undecided if an election were held today.

Among those who say they would vote the JLP enjoyed the lion’s share at 30%.

The poll has a margin of error of plus or minus three per cent.